The Lustrous Lustre Maiolica of Umbria 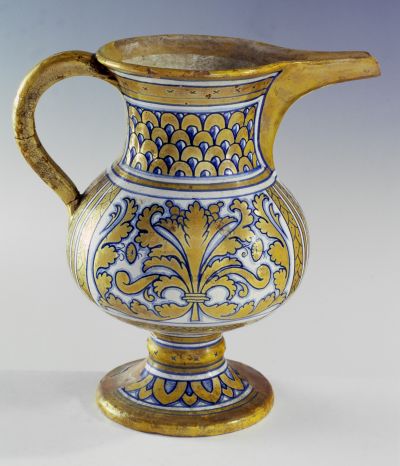 The lustre maiolica in the Umbria region of Italy are treasures I hope everyone gets to see at some point in their lifetime. Maiolica is tin-glazed pottery decorated in colors on a white background. The most renowned maiolica dating to the Renaissance period is, of course, Italian maiolica. Around 1500, lustre began to appear in Italian maiolica. Lustreware is a type of pottery or porcelain with a metallic glaze that gives the effect of iridescence.

The small hill town of Torgiano, just south of Perugia is home to the Museo del Vino, one of the finest private museums in Italy. As one of Italy’s premier wine museums, Greek, Etruscan and Roman ceramics, jugs and vessels, glassware, and various wine-making tools are displayed within 20 rooms of the 17th century palace. Here, 3,000 treasured objects dating from the third millennium B.C. link to the mystique of wine in art, commerce, literature, philosophy, myth, religion, and pharmacology.

The “Wine in Myth” section of the museum showcases the exhibit, “The Infancy of Bacchus.” Within this exhibit, a 16th century lustre plate illustrates the infant Bacchus playfully putting a grape into the mouth of old Silenus, his teacher, represented here as a satyr on the masterpiece of lustreware work of Maestro Giorgio Andreoli of Gubbio (1528).

The grape held by the infant Bacchus as well as the bunch of grapes and the wine pitcher gripped by the elderly Silenus are all of the stunning ruby red lustre which Andreoli had created and which exalts the scene. It seems that the god was initiated to viticulture by Silenus, the often-inebriated but wise old man, which Mastro Giorgio – in a splendid unity of attributes – overlaid with Pan in this creation of the scene. The work bears the artist’s signature and the year 1528.

With extraordinary technical knowledge and a stupendous color sense, Andreoli had rediscovered Islamic and Mesopotamian maiolica lustre techniques, inventing his un-rivalled ruby lustre and setting it apart from the Marche region’s Urbino and Deruta lustreware.

The Museo del Vino has two fine examples of Deruta lusterware called versatori (pourers or wine pitchers). This delicate lustre technique was devised by Islamic potters, adopted in Spain in the late ninth century, appearing in Italy in the 10th century even though it did not become important until the 15th century. It was applied to objects that had already been glazed and fired and involved applying a thin layer of metallic particles that, before a second firing in a reduction kiln, created lustrous iridescent effects of various colors, depending on the metal that was used.

Andreoli was commissioned to create numerous lustre works thanks to the marvelous sheen he achieved on them and was given honorary Gubbio citizenship by the Duke of Urbino, and tax emption as well.

Mastro Giorgio’s lustre process was a guarded secret passed on to his sons but it eventually died with them. Although no potter ever rivaled Maestro Giorgio, lustre continues in Umbria in the work of Gubbio potters and ceramicists of the hill town Gualdo Tadino, not far from Gubbio, represented in the 19th century wine pitcher and wine goblet depicting Alfredo Santarelli’s la Baccanalia (ancient Rome’s orgiastic, euphoric March celebrations of Bacchus).

After a visit to the Wine Museum, head to the nearby town of Deruta, famous for its maiolica production which started there around the 13th century. Here, family-run maiolica workshops allow visitors to see all the phases of production. The Regional Ceramics Museum of Deruta, opened in 1898 in the center of town, is the oldest ceramics museum. More than 6,000 maiolica treasures housed in the restored 14th century convent of San Francesco fascinate guests touring the museum.

Torgiano and Deruta are the perfect pair for a memorable Umbrian lustreware tour.

View the embedded image gallery online at:
https://www.lagazzettaitaliana.com/travel/9617-the-lustrous-lustre-maiolica-of-umbria#sigProId0a9fc7b89a
Tweet
More in this category: « Time-Traveling to the 1960s In an Italy Without Tourists The Many Reasons to Visit Catania, Sicily »