Time-Traveling to the 1960s In an Italy Without Tourists 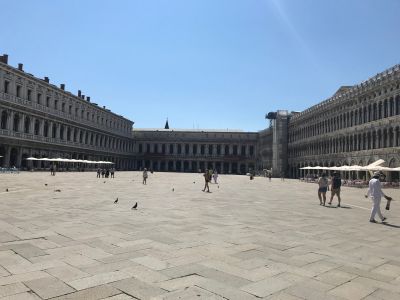 In the 1960s, I had my first ever holiday abroad, in Italy. It was thrilling, colorful and completely different from anywhere I had ever been before. I have just experienced a return to that magical time before mass tourism, looking at sights again as if I have come out of a long hibernation. Going there just now is strange, but the atmosphere is welcoming. Tourists even in small numbers are greeted with much enthusiasm.

It was hard to know what to expect in airports and on planes, but I need not have worried. In fact, it was the best flying experience ever. Airports were deserted with many shops closed, but there were no queues and arrangements for boarding and disembarking were well organized with extra precautions for spacing, timing and testing. Temperatures were taken, but it did not cause hold-ups and the plane left on time, arriving 10 minutes early. The Italian Government requires a form to be filled out by every passenger, giving contact details, but the officials didn’t seem very keen on collecting them.

Traveling by train in Italy is now rather different. There is a normal timetable, but there are notices to tell passengers only to occupy window seats and masks are of course compulsory, with frequent reminders (in mangled English) over the speaker system. Each carriage has one door for entry and the other for exit to help with distancing arrangements and platforms have marked spaces to stand.

A day in Venice felt very strange. I have never seen the station looking so eerily empty and wandering the deserted alleyways became a pleasure instead of jostling with the usual crush of people. Most of the shops along the Strada Nuova, Venice’s main shopping street, were open and to entice the small numbers of tourists, trattorie offered bargain three-course lunches for €11 including drinks, service and cover charges.

Arriving at St Mark’s Square felt like stepping into a De Chirico painting – strong shadows and three distant figures in a vast empty space. It had even been deserted by the usual flocks of pigeons. On the waterfront, rows of gondolas bobbed about with covers on, waiting for the tourist season to re-start.

Lunch in a favourite trattoria, Alla Vedova, was an unexpected experience. Normally, it is lively and crowded with groups of locals at the bar munching cichetti (snacks), especially its famous meatballs, and drinking wine, but this time the bar area was silent and the tables spaced out, which actually made it better for examining the paintings and curios which decorate the walls and ceilings. The waiter said it had reopened at the end of May, but up to now they had mainly served locals, although he sensed that slowly (noting our presence) tourists were returning. Of the six occupied tables, four were Italian families, one French and one English.

There were sanitizing arrangements even on entering the vaporetti and everyone wore face coverings on board. In Venice you can now buy masks with the design of the Venetian flag, a popular new souvenir which looks rather weird with a winged lion across the mouth!

Visiting old friends like Venice’s amazing churches was another unfamiliar experience. At San Zaccaria, for instance, we were the only couple there, all the better to appreciate the fantastic paintings, especially the Bellini, and to experience the eerie atmosphere of the flooded crypt with no loud conversations in many languages to spoil the serenity and timelessness of the ‘floating’ tombs of doges.

A few days in Florence was slightly different. Here, there was certainly more evidence that tourists were returning, although most visitors were still Italian. Unlike every other summer, I saw no crocodiles of Chinese or Japanese tourists obediently following a raised umbrella and there were no Americans either. Some Europeans were in evidence, but in nothing like the numbers we are used to. In the Piazza della Signoria, David looked wistfully down wondering where all his admirers had gone and up the hill at the sublime church of San Miniato it was so peaceful that you could not imagine the presence of the great tourist magnet of Florence on the other side of the Arno. For the only time in recent memory, there were no coaches parked in Piazzale Michelangelo, often the tourists’ first view of the city. It was also an unexpected treat to go to great works of art like the Cenacolo (last supper) in S. Apollonia and have such places entirely to ourselves.

Leaving from Pisa airport was a strange experience. There were only three passengers on the Pisa People Mover between the station and the airport even though it was mid-afternoon. Arriving at the entrance to the terminal, we were required to walk through an arch which sprayed us with disinfectant before going to security. Half of the seats were covered with tape, but as there were very few people, it did not matter. Our return flight had only 24 passengers who were asked to sit in allotted seats for take-off and landing (for weight and balance) but could choose anywhere for the rest of the flight.

Italy is famous for its renaissance. Now, it is experiencing another renaissance. It will survive – it always has – and slowly things are returning to an unfamiliar new normal.

This article first appeared in a slightly different form in Italy Magazine.

Tweet
More in this category: « Little Italy of Staten Island The Lustrous Lustre Maiolica of Umbria »