The Many Reasons to Visit Catania, Sicily 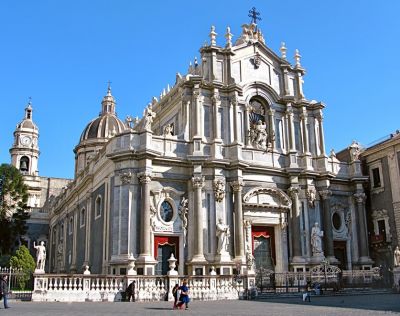 Catania is Sicily’s unsung city. The airport is a convenient 15 minutes from town. It receives legions of tourists annually and then they flee, north and south, without giving the city its due. Catania is situated in the middle of Sicily’s eastern coastline, favors its Greek heritage and it is an ideal place to park your bags, embark on day trips and return to enjoy the nightlife, but not before you give Catania the attention it deserves. It is a city with young and old, entrepreneurs and working people. It bustles except during the afternoon lunch hours.

From the airport you can be whisked into the city’s center by public bus or taxi, approaching the Roman aqueduct under which water once flowed. You will see one of the most ornately Baroque and historic palaces in front of you, the Palazzo Biscari, and to your left, the area where the bustling historic fish market, the Pescheria, that has been open six days a week since the time of Arab rule.

Take a day or two to walk around the historic center. It will inevitably land you in the Piazza Duomo, a large open space where the Baroque Cathedral dominates, and people congregate underneath the curious and iconic Liotru, Catania’s elephant statue and city symbol. A prehistoric creature carved in lava stone, with an obelisk on top and a cross at the very top, the statue was installed in the piazza in 1239, embellished and restored over time. Its meaning, still under debate, includes magic and protection from eruptions, and perhaps that is what all the native gesticulating gentlemen talk about after lunch each day when they fill the piazza.

The Duomo itself has a long history, dating from the 11th century. Earthquakes damaged it many times since and the façade we see was constructed in the 18th century Baroque style. It sits atop Terme di Achilliane, the remains of Roman thermal baths, with beautifully preserved wall decoration. Catania has the largest concentration of Roman ruins in Sicily. Just down Via Vittorio Emanuele, a main thoroughfare, is the Teatro Romano. Small in comparison to some of Sicily’s other theaters, it is amazing to see how the subsequent generations built a city right around it; for Sicily lives among its history. Catania also has an Anfiteatro Romano and it dominates the Piazza Stesicoro (named for a Greek poet), opposite the statue to Vincenzo Bellini, Catania’s genius composer. One can descend into the remains and walk through its immensity.

La Rotunda, another structure where Romans bathed, is distinct with its domed top and circular shape. It was subsequently used as a church and recently underwent some restoration. Bits and pieces that testify to Roman presence in Catania lie around the city and a trained guide can point them out.

Not to miss, and not Roman, is the 17th century Monastero dei Benedettini di San Nicolò l'Arena. This jaw droppingly ornate Baroque building, a one-time monastery, is part of Catania University now. Take the fabulous tour on the weekends so you can access the rooms that would otherwise be full of staff and students.

Why the Baroque presence? The earthquake of 1693 destroyed 70 towns on Sicily’s eastern side, including Catania, which lost two-thirds of its population. The enormous feat to reconstruct at that time meant that the style would mimic the post-Reformation Baroque of northern Europe. It was a time to restore Christianity, its power, wealth and the importance of the church. In much of Catania’s renovation, the architect Giovanni Batista Vaccarini had an influential hand, from the Cathedral to the important street, Via Crociferi, an offshoot from Piazza San Francesco. Lined with large ornate and imposing churches representing different religious orders, Vaccarini was involved in the design, particularly of the wonderful Collegio dei Gesuiti.

The Baroque architecture is not what makes Catania architecturally unique. It is the use of lava stone in their buildings. You will notice as you walk around the black and white style, using stones hewn from the lava of Her Majesty Mount Etna, Europe’s most active volcano.

Catania boasts three churches and more than a few statues dedicated to their revered patron saint, Sant’Agata. Her story is celebrated in one of the world’s most elaborate and extraordinary three-day feasts each February. It is religious, pagan and full of tradition. The entire population takes a deep breath, and everything stops but for her procession around the city. It is a truly amazing experience and if nothing else, a photographer’s dream.

You will want to restore yourself in the evenings and Catania, in the midst of a food renaissance, is a perfect place. If you are lucky, you can take in a concert or opera at the stately Teatro Massimo complete with statuary, gilding and brocade, but if not, the open-air theater that is Catania itself will fill you with wonder and curiosity. You will want to know what the rest of the Island has to offer and how it reflects such a long history and so many vibrant cultures.

Tweet
More in this category: « The Lustrous Lustre Maiolica of Umbria 52 Things to See and Do in Basilicata »