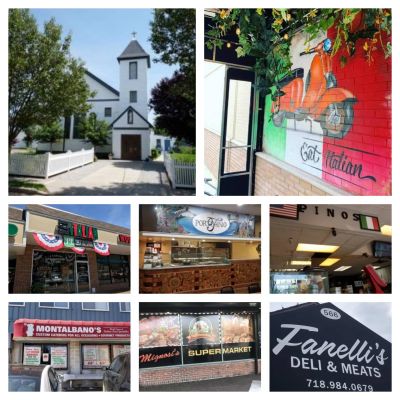 When you think of an Italian neighborhood in New York City, you probably get an image of Manhattan's Little Italy in your mind. You may even think of Bensonhurst in Brooklyn or Arthur Ave. in the Belmont neighborhood of the Bronx, but these communities are, unfortunately, no longer predominantly Italian.

The Rossville section of Staten Island is the biggest Italian neighborhood in the Big Apple today. In fact, over half of the inhabitants are Italian American. Rossville is on the island's South Shore.

If you ever decide to come to Rossville, make sure to get a slice of pizza at Portofino Pizza. You will not be disappointed. The small pizzeria also has fresh garlic knots that are out of this world. Pino's Pizza is also a great Italian American pizza shop in Rossville.

Eat Italian is the only authentic Italian restaurant in the Rossville area. Known for great pasta dishes, Eat Italian is owned by an Italian chef named Gianfranco Franzese who graduated with a degree in Culinary Arts from Istituto Profesionale Alberchiero in Bari, Italy in 1987.

Rossville has three fantastic Italian grocery stores. Mignosi's Supermarket on Rossville Ave. is one of them. Mignosi's is known for its fresh and delicious Italian bread. Supreme Italian Market, also on Rossville Ave., is known for its delicious Italian sausage. The first Supreme Italian Market in NYC opened in the Bensonhurst neighborhood in 1949. Moltalbano's Pork Store and Italian Food Specialties is another great Italian grocery store in the neighborhood. Owned by the Parrelli family since 2001, Moltalbano's has wonderful Italian products.

The neighborhood even has a wonderful Italian American deli which is popular for having incredible sandwiches. Once called Rocco's Deli, it became Fanelli's Deli in 2018.

St. Joseph is the local Roman Catholic church in Rossville. It is Staten Island’s second-oldest Catholic parish. On Sunday mornings, you can hear churchgoers speaking Italian to each other at the church.

The borough of Brooklyn had several Italian neighborhoods, but many Italian Americans have moved out of the area after several manufacturing plants were closed. Many immigrants from non-traditional and eastern European nations have dominated these historically Italian neighborhoods. For example, Bensonhurst is primarily a Vietnamese neighborhood today.

There is still a large amount of Italians in Bensonhurst, with some great Italian establishments, such as Ortobello's, an Italian restaurant on Bay Parkway. Fans of the film “Saturday Night Fever,” might enjoy a slice at Lenny's Pizza on 86th St., which was the setting for a few scenes in the movie. Brooklyn's Sheepshead Bay was another large Italian neighborhood until it eventually became a Russian neighborhood in the 1970s.

Tweet
More in this category: « Balancing Venice and Tourism Time-Traveling to the 1960s In an Italy Without Tourists »