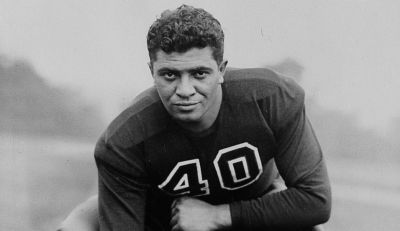 The long and arduous journey to coaching greatness for Lombardi would humbly begin in the New York City borough of Brooklyn.

Vincent Thomas Lombardi was born on June 11, 1913 in Brooklyn to Neopolitan-born father Enrico “Harry” Lombardi, who emigrated at age two, a butcher and meat distributor, and Brooklyn-born Matilda Izzo, the daughter of a barber from east of Salerno in southern Italy.

Young Vince Lombardi and his brothers were very much influenced by the strong will of their father. Phillips, a Lombardi biographer, vividly described Harry Lombardi in 2001 saying, "Harry was honest, straightforward and a pure perfectionist. Those around him had to do things right or not at all. He constantly lectured his three sons that they’d be successful only if they worked harder than everybody else.”

Lombardi was raised in the Sheepshead Bay area of southern Brooklyn and attended public schools through eighth grade. After eighth grade, young Lombardi faced the first critical decision of his young life: Where should he continue his education?

In 1928, at age 15, he entered the Cathedral College of the Immaculate Conception, a diocesan preparatory seminary and a six-year secondary program to become a Catholic priest. “The Trinity of Vince Lombardi’s early years was religion, family and sports. They seemed intertwined, as inseparable to him as Father, Son and Holy Ghost. The church was not some distant institution to be visited once a week, but part of the rhythm of daily life...,” said award-winning Lombardi biographer, David Maraniss. "When his mother baked bread, it was one for the Lombardis, one for the priests, with Vince shuttling down the block between his house and the St. Mark’s Rectory delivering food and tendering invitations.” Young Vince was devoted and followed his mother’s lead in worship. “From an early age, her son, Vince, revealed an equally strong affinity to Catholicism’s routine. As an altar boy, he never wanted to be just another candle bearer, but up front in the procession, bearing the cross.” In 1999, Maraniss wrote, “He was remembered at Cathedral for three characteristics: his smile, a sudden, wide flash of teeth that heated the room; occasional eruptions of anger; and his physical maturity. He had the body of an adult at age 15…They knew that he played football on a sandlot team on Sunday afternoon. The Cathedral priests disapproved of violent sports; the only thing worse was going out with girls.”

The love for football and sports, in general, trumped his calling for priesthood. Lombardi transferred to St. Francis Preparatory High School where he was a standout on the football team, making the All-City team as a fullback.

In 1933, Lombardi accepted a football scholarship to Fordham University to play for Sleepy Jim Crowley, the new head coach who was one of the Four Horsemen of Notre Dame under Coach Knute Rockne in the 1920s. During the early 1930s, Fordham was recognized as the largest Catholic university in the nation and was nationally heralded for stressing character and the development of social morality. Relevantly, Phillips recalls Lombardi’s impact at Fordham: “At Fordham, Lombardi gained a reputation for being extremely tough – playing all-out, even when seriously hurt...In later years, Lombardi was fond of retelling the story – saying that his father had often told him to ignore the small injuries; that hurt is in the mind.”

Lombardi was converted from fullback to an undersized offensive guard at 5-foot, 8-inches and 185 lbs., but his hustle and toughness won him a starting position on Fordham’s offensive line where they gained football notoriety and were acclaimed as the Seven Blocks of Granite for their staunch, tough play on the line.
In the classroom, Lombardi was, at best, a slightly above-average student. He earned his Bachelor’s degree from Fordham in June 1937. He was 24-years-old.

The importance of Fordham in Lombardi’s life went beyond football. It was Lombardi’s understanding of the Jesuit tradition and philosophy at Fordham that would forever fuel his methodologies in coaching, leadership and in life. Maraniss explained, “There is a direct line in thinking from the Jesuits to football to what would become the philosophy of Vince Lombardi. They also maintained a hierarchical order in which the inferior submits willingly to the superior…This willingness to accept a rightful order required believing that the chief – God, the general, the coach – loved each member of the group with the same love.”
In 1939, after two years of unfulfilling jobs, semi-professional football with the

Brooklyn Eagles and Wilmington Clippers and a semester of Fordham’s law school at night, Lombardi gladly accepted an assistant coaching job at St. Cecilia’s, a Catholic high school in Englewood, NJ. He was hired by its new coach, a Fordham teammate, former quarterback “Handy” Andy Palau. In addition to coaching, Lombardi, age 26, also taught Latin, chemistry and physics for an annual salary of under $1,800. He and Palau shared a boarding house room across the street for $1.50 each per week.

In 1940, Lombardi married Marie Planitz, a cousin of another Fordham teammate, Jim Lawlor. In 1942, Palau left for Fordham and Lombardi became the head coach at St. Cecilia…

In next month’s issue, we will continue with Lombardi’s coaching experience from St. Cecilia to the collegiate level and into the NFL.