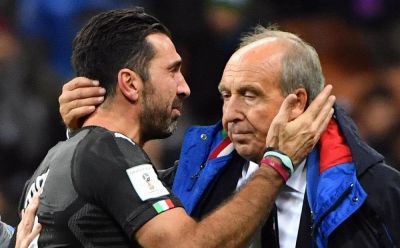 For the first time in 60 years, Italy failed to reach the World Cup finals. And, the four-time world champions are being thrashed by the country’s media. Calling the let-down the “Apocalypse,” many of Italy’s newspapers blasted offensive headlines at the end of the Italian team’s season. La Gazzetta dello Sport wrote, “It is one of the darkest pages of our sporting history; a brutal blow beyond the incalculable damage for a country which lives and breathes football. It’s a sporting equivalent of Titanic.” While Il Corriere dello Sport said, “It’s an intolerable footballing disgrace; an indelible stain. It’s the end. Apocalypse, tragedy, catastrophe. Call it what you want, but our football is in a serious crisis.”

The blame is falling on the Italian football association itself. Antonio Chiaese wrote for the Guardian, “Our football association is led by incompetent officials who are keen to bow to top clubs’ demands and are unable to craft a long-term plan. The choice of Ventura as manager was the outcome of these logics. Ventura has always been a minor player among Italian coaches and his main flaw was a stubborn adherence to his old-school tactical creed. The way he used Lorenzo Insigne only sparingly and called up someone as good as Jorginho for the last play-off match only was criminal. His lack of charisma compared to his predecessor Antonio Conte also worked against him. There was mutiny in the ranks between senior players such as Daniele De Rossi, Andrea Barzagli, Leonardo Bonucci and Giorgio Chiellini and the management. It was never going to end well.”

Tweet
More in this category: « Winter Sports-Lovers: This is for You! Giro d'Italia »