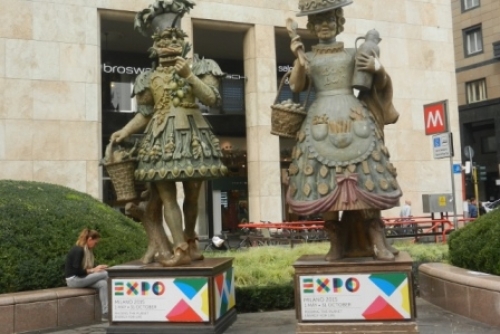 If you are planning a trip to Italy this spring or summer, you probably are finding that many of the hotels are already booked, particularly in northern Italy. The reason for this is Expo 2015, to be held in Milan.

Beginning May 1, the city of Milan will host the next Universal Exposition, Expo 2015. The event will run until October 31, and the theme will be "Feeding the Planet, Energy for Life". Milan won this bid over other top contenders: Izmir, Turkey, Atlanta, Las Vegas, NYC, and Moscow. This will be the first time the Expo will be held in Milan since 1906. Occurring every five years, the previous Expo was held in Shanghai, China in 2010.

This year 144 countries and three international organizations will participate, and the huge exposition will occupy 1 million square meters. The actual Expo site is located northwest of Milan and will cover approximately 1.1 million square feet, encompassing part of the area near the towns of Pero and Rho. Each country is allowed to rent space for their pavilion, ranging from 400 to 6,000 square meters, or 478 to 7,175 square yards. On the site, a huge agro-food park, built on a grid, will be surrounded by water channels and interspersed with stunning landscape architecture.

Italy expects over 20 million visitors to attend the event, and, of course, many will travel throughout the country giving Italy's economy a much needed boost. By mid-November, over 6 million tickets had already been sold, according to Giuseppe Sala, Milan Expo 2015 Commissioner. One million of those tickets were purchased by Chinese tourists.

If you are considering attending the Expo, you can save 20% by purchasing tickets now, prior to its opening in May. Tickets are available online with either a Visa or MasterCard at the official website, http://www.expo2015.org/en/tickets. You can purchase up to 15 tickets, and you can choose a "fixed date" or an "open date" ticket, which allows you admission on any day. Admission for one day is â¬32 for adults age 14-64 and â¬25 for senior citizens 65 and over. Family packages are available beginning at â¬41. Children age 0-3 are admitted at no charge.

It seems appropriate for Milan to host this Expo, since the city is the epicenter of an Italian area comprised of almost 10 million residents. This area produces 10% of Italy's national GDP, its per capita income is almost double the national average of Italy, and its unemployment rate is half that of Italy. Milan is the home to 650 fashion showrooms, and the entire metropolitan area is similar in scope to that of London or Paris.

I was in Milan a few months ago and quite a few buildings have scaffolding as the city works to prepare and restore the monuments for this millennial event. If you can deal with the crowds, it's not to be missed, but I'd make my travel plans sooner than later. Buon viaggio.

Tweet
More in this category: « San Gennaro in Oratino Get a Gondola in Venice! »