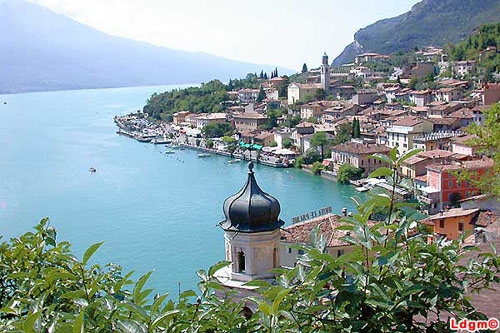 While relaxing in my garden, I appreciate all of that surrounds me: the greenery, the beautiful flowers that are getting ready to bloom, the chirping of the birds and my vegetable garden. All of this leads me to think of my country and the camping trips I took with my parents during summer vacation.

We would leave the first days of August and return to the city after three weeks or sometimes even four! Once we decided our vacation destination, it would act as a base, because then we would move around for day trips in order to discover new places.

There are many different sites in Italy that many foreign tourists don't even know about. By visiting the classic cities that represent the Bel Paese, many times, the little local treasures are known to very few. Allow me to uncover these very treasures that help make Italy so unique.

First stop is the little town of Limone sul Garda. It is located in the northern part of Lake Garda, right on the borders between the regions of Lombardy and Trentino Alto-Adige. Limone is known for its beautiful landscape and its multiple habitants who are more than 100 years old. Limone also is home to the northern most lemon groves of the country. This citrus plant abundantly grows throughout the city, hence the name of the town meaning "lemon."

Bordering Limone is the city of Riva del Gardaâanother enchanting town at the feet of the Dolomite Mountain range. Today, Riva del Garda is considered an excellent tourist destination. The 12th century fortresses and castles of this little jewel offer a picturesque background to the already breathtaking, natural landscape of the mountains and lake. In Riva del Garda is also a popular place for wind surfers and hang gliders who enjoy the beautiful scenery from a different angle.

With temperatures similar to those of southern Italy, rich coastal-like vegetation and sun-filled days almost 365 days out of the year, Lake Garda is really a magical place to visit. During the summer, the best thing to do is to take a charming walk on the shore of the lake, surrounded by multicolor oleanders and geraniums. Along the shore are many spas and thermal springs.

Perhaps the most famous spa is the one located in the town of Sirmione, "Le Terme di Sirmione." Just as charming as Limone and Riva del Garda, Sirmione offers a beautiful, color landscape and is home to one of the most well preserved castles in all of Italy, the "Castello Scaligero". Walking through the narrow streets, it is obvious that Sirmione has maintained its antique and charming allure. Also found in this Lake Garda town is the Roman villa known as "Grotte di Catullo (Catullus)." These striking Roman ruins are evidence of the largest and most important Roman villa ever discovered in northern Italy. The villa was actually not of the famous, Latin poet, Catullus. He had a home in Sirmione, but this extensive Roman villa was not it.

Five islands can also be found on Lake Garda. The largest island is "Isola del Garda," where St. Francis of Assisi (Italy's patron saint), founded a monastery of his order. Unfortunately, the monastery was destroyed during the Napoleonic wars. Today in its place stands a Venetian-oriental style 19th century new Gothic palace, completely immersed in a luxuriant Italian garden.

This summer, if you are planning on visiting this beautiful area of northern Italy, nearby Verona offers many interesting sites from the celebrated and world famous Arena, an important symbol of lyrical and operatic performances, to the famous balcony of Juliet of Shakespeare's "Romeo & Juliet." Nevertheless, do make sure to take a day trip to one of these fantastic locations on Lake Gardaâyou will not be disappointed.

Last thing; don't forget to try the typical plate of the area, "i Nodi d'Amore" meaning "love knots." A variation of typical squash filled tortelli, "i Nodi d'Amore" are made out of very thin, silk-like dough and knotted like a handkerchief and served with a delicate squash filling and amaretto cookie crumbs. Absolutely delicious!

Tweet
More in this category: « Naples and the Italian Genius Naples Pride & Joy »