The City of Ceramics with a Promising Future for the Youth 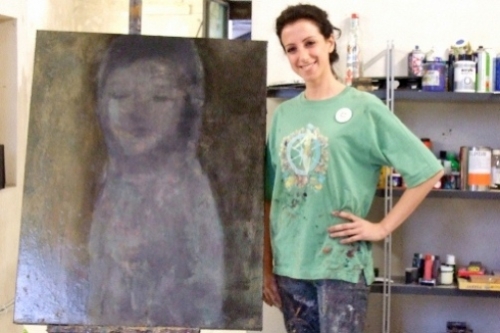 Artist, Miriam Pace of Caltagirone in the Via Roma 155 Studio

Caltagirone is not generally known as one of the most popular tourist destinations in Italy. In fact this Sicilian Baroque town that sits high on a hilltop between Siracusa and Agrigento is an artistic gem in disguise, especially for any ceramic lover.

As you enter Caltagirone, you are immediately surrounded by hand painted ceramic tiles. The ceramics are located all along the walls, bridges and balconies, not to mention the hundreds of shops in this city of 39,000 people, it is no wonder it is referred to as "the Sicilian city of ceramics." In many of the shops, you may even observe the actual artists working their magic. Some of the best ceramic artists in Italy live and work in Caltagirone in shops handed down from generation to generation. Beginning in the 2nd century B.C., local pottery production began and continues today as a major industry for this southern town.

Recently, there has been a great emphasis on the artistic value of the ceramics and other art forms, particularly by the young people. I have traveled to Caltagirone several times and on my recent last visit, I had the honor of meeting several of these young artists who have just established the very first studio and showroom in Caltagirone for artists. This unique art space is known as Via Roma 155, which just so happens to be the address of the studio. Miriam Pace, a local, young artist gave me a tour of the space, while artists were working on their pieces of art. Pace started painting at the young age of ten when she had a serious illness which forced her to stay home for several years. She said that "colors became my best friends and never left." Pace has had several exhibitions in Italy and is eagerly looking forward to traveling to New York City next March to participate in the New York Art Expo.

Although over 20 artists participate in this work space, there is a core group of seven involved in the visual arts inside, including Emanuele Guzzardi and Miriam Pace in charge of the paintings, Cristina Giaquinta heading up the installations, Santi Partito and Felice Fiorentino in ceramics, Simone Pitrolo overseeing engraving and lastly Evelina Giaquinta in sculptures. This space is not only dedicated to visual arts, as it is also utilized for other artistic activities such as performing arts, music, poetry and theatre.

Caltagirone's famous landmark is a large ceramic staircase, the Scala di Santa Maria del Monte. This impressive 142 step stair case connects the old city or "centro storico" at the top to the new city at the lower end. Each riser on every step consists of hand-painted majolica tiles and while no two have the same design the predominant colors of these unique tiles are blue, yellow and sage green.

Like in ever Italian town, the townspeople host a celebration dedicated to the patron saint. Every July the Luminaria Festival celebrate Caltagirone's patron, San Giacomo. The Scala di Santa Maria del Monte is illuminated on July 24-25 with thousands of small oil lamps which are placed in such a way creating a very beautiful design, a site which attracts thousands.

If you plan a trip to Sicily, include Caltagirone as it is only about 45 minutes from Catania. It is such an artistic city where you can find wonderful, unique and hand-made ceramics that are certainly worth the trip.

Tweet
More in this category: « Altopiano dei sette comuni - Between Tradition and Immigration The enchanting island of Sardegna »