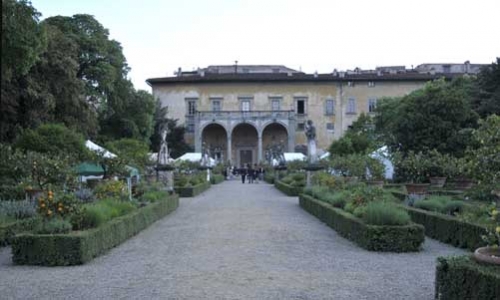 Bearing his cross, Jesus was taken to the place of the skull, which in Hebrew is called Golgotha. Here, he was crucified and it is said that earth brought from Golgotha by Saint Helena was spread at the Vatican Gardens site to symbolically unite the blood of Christ with that shed by early Christians persecuted by Nero.

In 1279 Pope Nicholas III (Giovanni G. Orsini) decided this site would be a place of quiet and meditation for the popes. He was looking for a greener area than San Giovanni in Laterano, which were both the cathedral of Rome and the official residence of the pontiff. Pope Nichola left Laterano and moved his residence to the Vatican.

At the Vatican he singled out an area and ordered walls to be built to ensure protection. The pontiff then ordered that an orchard be planted along with lawn and garden sections.

Today this area on Vatican Hill bounded by stone walls covers 57 acres. During the papacy of Julius II (early 16th century) there was a major design change with courtyards, walls and very rare trees donated by delegations over the years visiting the Holy Father. Included are two very tall Australian silk-oaks, the majestic camphor tree and an olive tree donated by Israel.

Monuments and a variety of fountains were added among flower beds, laws, patches of forest and ornamental shrubbery including azaleas and rhododendron. The Fontana dell'Aquilone (Fountain of the Great Eagle) is adorned with dragons and a sea god (triton/upper head and body of a man and tail of fish) dominated by the above great stone eagle. The most notable of the structures is Galera, which has in the middle of its basin a model of a 17th century ship with jets of water.

The gardens feature a French garden with red rock paths and terracotta pots. Also depicted are a series of sculptures and grottoes devoted to the Madonna and a nearby heliport in the protective custody of a bronze image of the Black Madonna, built during the papacy of Pope Paul VI (Giovanni Montini, 1963-1978).