Top must visit cities in Italy 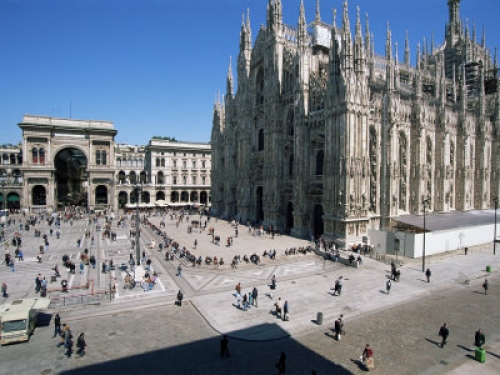 When it comes to history, architecture, food, fashion, art, striking landscapes, beautifully preserved towns and villages, coastlines like no other in the world, there is nothing quite like Italia! From the mountains to the sea, for food and culture lovers, there's something here for everyone. Italy is a country that is very rich in diversity. Whatever reason you choose to make Italy your travel vacation destination, Italy is a truly rich tapestry of many choices. With the height of the vacation season quickly approaching, I am pleased to recommend my personal favorites spots. Enjoy Bella Italia!

FLORENCE: It's easy to see why travelers chose Florence as the world's number one destination, as it is acknowledged as one of Italy's most beautiful cities and one of the world's greatest artistic capitals. Florence is a testament to the Italian capacity for genius. This was the birthplace of Dante and the model for the Italian language. The city was also the cradle of civilization, which fostered the humanist movement and the Renaissance in the first half of the fifteenth century. Florentines are very proud of their city and their cultural tradition -- and for good reason. After all, it was the Florentines that bestowed on Italy its language, its art and the earliest model of government. The greatest development for Florence took place under the Medici family between the fifteenth and early eighteenth centuries. From the late fourteenth century, Florence was the school of Italian art, bringing the rest of the world such master sculptures and artists such as Donatello, Giotto, Rossellino, Ghiberti, Botticelli and of course the greatest genius of all, Michelangelo. The focal point of this city is the Piazza della Signoria, which contains fine monuments such as the Fountain of Neptune, a bronze statue ofGrand Duke Cosimo by Giambologna, and the collection of the famous work under the arches of the Loggia della Signoria. And it doesn't end here. The Accademia Gallery, the Uffizi and the Pitti Palace round out this exceptional artistic and intellectual city.

Florence tip: For the best panoramic view and photos that overlook the entire city of Florence, be sure to stop at the Piazzale Michelangelo. You will be amazed at the view from this point. Great for picture taking!

MILAN: Milan, one of Europe's richest cities, is best known for its stylish shops, art galleries, museums, and restaurants. It also has a rich artistic and cultural heritage. Its magnificent Duomo with its beautiful marble faÃ§ade that took nearly 225 years to build and was consecrated in 1418 , yet remained unfinished until the 19th century , when Napoleon , who was crowned King of Italy here, had the faÃ§ade completed. The Teatro alla Scala one of the world's most famous opera houses, Leonardo da Vinci's Last Supper painted in the refectory of Santa Maria delle Grazie in 1495 -97and the Castello Sforzesco built in 1368. When it comes to fashion and shopping there is nothing in the world quite like Milan. Milan is a very cosmopolitan city and truly the fashion capital of the world. Here, fashion rules and for the serious shoppers you will find the finest labels and top designers in the world. A must stop in Milan is the area known as the Golden Quadrangle, Milan's equivalent to designer shopping nirvana. Virtually all of Italy's top designers' house their flagship stores here, including names the likes of Armani, Dolce & Gabanna, Missoni, Gucci, Valentino, Versace, Zegna, Prada, Roberto Cavalli, and many others. You will also find brand name designer cafes, cocktail bars, hotels and restaurants nearby. Even if you love to shop and you are on a budget, this city will still serve you well. The spirit of independent boutiques and designers still flourishes in Milan, and not just fashion. Whatever you wish to take home -- kitchen items, contemporary furniture, lighting -- you will have no trouble finding the unmistakable, and unique, Milanese style. So when you have the urge to shop for those special items, make Milan a must stop when you are in Italy.

CINQUE TERRE: When it comes to coastal scenery and charm, there is nothing quite like Cinque Terre. For me this is an area that I just can't seem to get enough of. The 15-kilometer stretch of coastline that is known as Cinque Terre (Five Lands) is the most beautiful coastline in a country that defines itself aesthetically. The Azzurro (Blue Trail) consists of a one-time mule path that linked all five oceanside villages by foot. Words alone cannot describe just how beautiful and special this place is. In 1998 UNESCO designated Cinque Terre as a World Heritage Site. This decision was based on the grounds that this area is a shining example of how the harmonious interaction between man and nature can produce a landscape of exceptional scenic quality, illustrating a traditional way of life that has existed for nearly a thousand years. Nothing has changed here. You will be amazed at the hilltop-terraced vineyards cascading down to the sea. Cinque Terre is made up of a group of five coastal villages: Monterosso al Mare, Vernazza, Corniglia,Manarola and Riomaggiore. These five villages are situated along the extreme eastern end of the Liguria coast between Levanto and La Spezia. Each town conveys its own unique character and charm. If there were ever a place in Italy that you would use the term "picture postcard" it would best apply here. CinqueTerre is a place to walk along its spectacular coastline trails, admire its landscape and revel in its beauty. Top Tip for Cinque Terre: Do not miss the 1 kilometer walk along the Via Della Amore linking the village of Riomaggiore to Manarola, the most drop-dead gorgeous coastal hike in all of Italy.

VERONA: I am often asked the question as to which is my favorite classical city in Italy? The answer is quite simplly, VERONA!! This is a beautifully preserved fabled city that remains an undeniably romantic place. Dominating the entrance to the thumb-shaped old town in piazza Bra, the Arena is the most obvious sign of Rome's presence. This beautiful pink marble Roman amphitheatre was built in the 1st century AD and survived a 12-th century earthquake to become Verona's legendary open-air opera house, with seating for nearly 30,000 people. The outdoor performances here run from June to the end of August with over 50 performances by the world's top names. This is where Placido Domingo made his debut. Just off the Via Mazzini you will find Verona's main shopping area and the legendary Casa di Giulietta. The magnificent Piazza Delle Erbe , originally a Roman forum, is surrounded by cafes, restaurants and lined with some of Verona's most sumptuous buildings, including the baroque Palazzo Maffei. The Chiesa di Sant' Anastasia is Verona's largest church and a showcase for Veronese art. The multitude of frescos here is overwhelming. Drive through Verona's country side where to the north and the northwest you will find Valpolicella vineyards dating back to Roman times and east on the road to Vicenza are the white- wine makers of Soave.

PARMA: If you love food you will certainly love Parma. When it comes to food there is nothing quite like the region of Emilia-Romagna, the heart of Italian gastronomy. The area is rich in fertile farmland and lush grazing pastures. My favorite town for food in this region is certainly Parma. It is Parma and the surrounding area that has brought us the famous Felino salami, culatello di zibello (aged salted ham), the rare black truffles of Fragno, porcini mushrooms and the DOC wines. But the most famous of all, of course, are the two products that take their name from the area of origin: prosciutto crudo di Parma (Parma Ham) and Parmigiano Regianno, the most famous of cheeses. With such a long and distinguished history it is hardly surprising that Italians throughout Italy hold this region in such high gastronomic esteem.

Food in Parma is a way of life and people here celebrate it with every opportunity they have. Museums have even been dedicated to the subject! In the summer months, beautifully designed market stalls spring up in every piazza, proudly displaying and exhibiting all the big food contenders. In May, the Castles of the Duchy of Parma and Piacenza open their doors for the sumptuous banquets of the Ricordanze di Sapori (memory of tastes).

SICILY: While many people will tell you there is nothing quite the likes of Sardinia, for me it is hard to beat Sicily for its beautiful beaches. The largest island in the Mediterranean, Sicily, boasts mountainous landscapes, Mount Etna volcano, rugged coastlines, charming fishing villages, blue waters and golden sands. Holiday resorts are plentiful here. The jewel of course is Taormina. Standing high on a plateau of 240 meters above the sea, Taormina combines great climate, breathtaking views of the bay and beyond, fantastic facilities and great beaches. It is renowned for its peaceful atmosphere and its beautiful monuments and gardens. While you can spend a great deal of time sunbathing in Sicily, there is plenty to see and explore, from the third-century BC Greek amphitheatre to the Roman ruins, you can sample a variety of architectural styles. There is also nothing quite like a visit to Mount Etna; its dramatic backdrop is a sight to behold. There is something very special about Taormina. It is a town that despite its tourism has still retained its magical charm and beauty.

Peter D'Attoma is president of DaVinci Custom Travel & Tours. He has over 30 years of planning and designing independent, custom and escorted tours of Italy for individuals, groups and incentives. For more information E-mail: This email address is being protected from spambots. You need JavaScript enabled to view it. or call 330-633-2292. Visit us at www.davincicustomtravel.com.

View the embedded image gallery online at:
https://www.lagazzettaitaliana.com/region-of-italy/7650-top-must-visit-cities-in-italy#sigProId0329ff2e08
More in this category: « The lure of Apulia Umbria's Charming Gubbio »