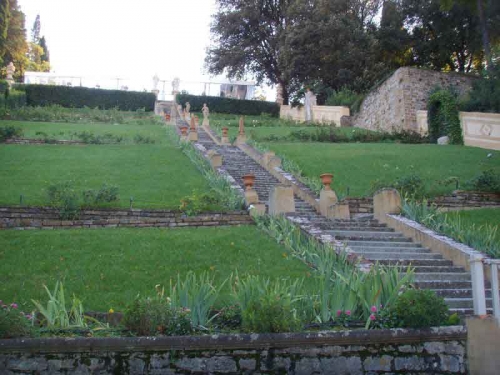 The baroque staircase at Bardini Garden Photo courtesy of Sailko

The baroque staircase at Bardini Garden
Photo courtesy of Sailko

Italy has some of the most well known and highly visited gardens -- Hadrian's Villa at Tivoli, Boboli Gardens, Villa Borghese and the Vatican Gardens -- in the world. It has more than 30 botanical gardens, including the Botanical Garden of Padua (Veneto), a World Heritage Site. Established in 1545, it's the oldest academic botanical garden worldwide.

The style of the classic Italian garden, a popular design of many public and private gardens, is international. The elegance and symmetry of an Italian garden -- with shaped hedges, multiple tiers, potted plants, water features and statues -- is planned to compliment existing architecture. In contrast, the contemporary Italian garden utilizes natural landscaping with regional plants, creating a less formal design with minimal upkeep.

Italy is dotted with thousands of gardens, public and private, large and small. The gardens listed below are distinct in design and offer varying combinations of one-of-a-kind elements, magnificent views, tranquil ambiance and historical significance.

The ancient city of Ninfa, about 40 miles southeast of Rome, is the setting for an exquisite garden built around the ruins and along the underground mountain streams of this once prosperous municipality. Established around the eighth century, Ninfa was purchased by the Caetani family -- relatives of Pope Boniface VIII -- in the late 1290s. A feud in the family fractured the town, and its location in the Pontine Marsh brought malaria, causing survivors to flee. By the late 1300s, the town was abandoned.

Over the years, several attempts at establishing a garden were made by members of the Caetani family, but it wasn't until the end of the nineteenth century that the garden began to take hold. Swamps were drained, weeds that covered the ruins were uprooted, trees, shrubs and numerous flowers were planted, as was the first rose bush. Today, almost 300 varieties of roses flourish along the paths throughout the 20 acres of gardens, along with 20 varieties of flowering cherry and numerous other plants. A wildlife sanctuary that surrounds the gardens is home to indigenous animals and over 150 species of birds. Visit the official website at www.fondazionecaetani.org/visita_ninfa.php.

Relatively new to the garden scene, Giardini della Landriana began in 1956 when owners Marquis Gallarati-Scotti and his wife Lavinia Taverna wanted to plant trees to shade the house and provide protection from the strong breezes of the Tyrrhenian Sea. Located in Ardea, about 15 miles south of the outskirts of Rome and about 10 miles north of Anzio, the barren property was riddled with land mines and bombs -- remnants of World War II.

A gift packet of seeds were planted and brought color to the property, and subsequent plantings were added to the landscape, creating a haphazard mix of flowers, shrubs and trees that lacked design and structure. In 1967, noted landscape architect Russell Page was commissioned to bring order to the garden. Page created rooms in the garden, combining formal and natural elements to showcase specific types of plants and creating a picturesque sanctuary with paths winding through flowering bulbs, shrubs and trees. Take a virtual tour at www.aldobrandini.it/sito/giardi/tour.shtml.

In the hilltop town of Bomarzo, about 60 miles north of Rome, a fantasy park was created in the mid-sixteenth century by nobleman Vicino Orsini in memory of his wife. Parco di Mostri (Monster Park), also called The Sacred Grove of Bomarzo, contains more than 20 monuments carved from giant boulders embedded on the property. Mythical figures, a dragon, an elephant, a turtle, several grotesque masks with mouths open wide enough to enter, a leaning house, a temple and various other structures appear throughout the garden. Inscribed with quotes from Ariosto, Dante and Petrarch, some provide insight to the significance of their creation, while others are left open to the viewer's interpretation. See an aerial view of the park at www.parcodeimostri.com/eng/itinerario.asp.

The Garden at Villa Pisani, designed before the Villa began construction in the early eighteenth century, encompasses a little over 27 acres nestled into a bend of the Brenta River. Located in Strà, not far from Venice, the Villa has a rich history -- commissioned by the aristocratic Pisani di Santo Stefano family, later sold to Napoleon Bonaparte (after he became King of Italy) who gave it to his stepson. After Waterloo, the Hapsburg family gained the Villa, making it a summer retreat visited by royalty throughout Europe; and when Veneto was taken over by the Kingdom of Italy in 1866,, the Villa became the property of the State.

The Villa faces the river, and behind it extends a reflecting pool that stretches to the stables at the opposite end of the property. On either side of the pool, an expanse of lawn opens to a canopy of trees with paths leading to the gardens' distinctive features. One of the most intriguing is a concentric maze circling a two-story tower and said to be the scene of many amorous adventures. Another is a small square building -- with a vented floor and exterior arches, pediments and columns -- that sits on a manmade hill. Underneath, an ice room brought cool air up through the vents and into the coffee house. Other features include an exedra with a three story turret and a rooftop terrace and a grove of potted citrus plants. For more information, visit www.villapisani.beniculturali.it/en/index.php.

In Florence, the Bardini Garden is the combined gardens of Palazzo Mozzi and Villa Manadora with a baroque staircase connecting the two. Started as an enclosed garden by the Mozzi family in the thirteenth century, the terraced garden, now at about 11 acres, overlooks the city of Florence and the Arno River, providing spectacular views. Through the years, both gardens evolved as various owners added statues, architectural details, water features and new plantings.

In the early 1900s, antique dealer Stefano Bardini purchased both properties and the surrounding areas and continued to make changes. Bardini's son inherited the property and left it to the State upon his death in 1965. The garden was neglected and fell into disrepair, but in 2000 a major restoration began, taking five years to complete. Parts of the earlier gardens were preserved and the crumbling, weed covered stairway has become the centerpiece of the garden; and in keeping with the Tuscan landscape, flowers, shrubs and fruit and ornamental trees were added. Go to www.gardens-of-tuscany.net/bardini-eng.htm to learn more about Bardini Gardens.

Across the Arno and northeast of Florence, the Garden of Villa Gamberaia is nestled into the hillside village of Settignano. Overlooking Florence, the classic formal garden -- designed to compliment the Villa -- offers stunning views of the city and the Arno valley. The Villa, built in the early 1600s, is set on a long, narrow piece of property surrounded by its landscaped grounds. A 1744 engraving depicts a cypress-lined walkway, a nymphaeum (grotto dedicated to water nymphs), statues, planting beds and a lemon terrace.

In the 400 years since the garden was designed, its various owners have added features, leaving most of the original plan intact. In the late 1800s, a water garden with four pools surrounded by spring and summer bulbs and flowering shrubs replaced old flower beds. Under new ownership in the early 1900s, the water garden took on a more formal look with carefully clipped hedges replacing most of the flowers. The Villa and gardens were damaged during World War II, but in the early 1950s, new owners began restoring the property and continue to add improvements. The Garden of Villa Gamberaia is often cited as a perfect example of a classic Italian garden. Visit www.villagamberaia.com to learn more.

All the gardens above are open to the public, but days and times vary. If you plan to visit Italy, make arrangement to include some of these enchanted gardens.

Janice Therese Mancuso is the author of Con Amore, a culinary novel; and founder of Thirty-One Days of Italians, an educational program to promote Italian and Italian American history, culture, and heritage. For more information, visit http://home.earthlink.net/~31italians, www.jtmancuso.com, or email at This email address is being protected from spambots. You need JavaScript enabled to view it..