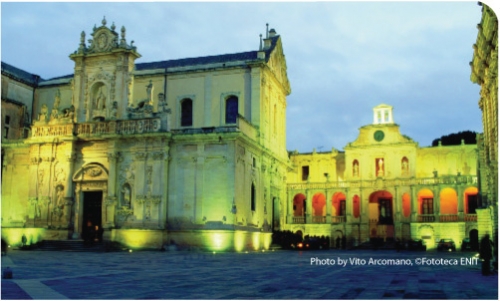 Travel as far southeast in Italy as you can to the Salentine peninsula, the thin stretch of rich soiled land lapped by two different seas, and once you reach the tip of the Italian boot you will have come to the magnificent, charming city of Lecce, famous all over Italy for its stunning Baroque architecture. Nicknamed “the Florence of the South,” which is very fitting for this city because both of these cities share a common bond with a profound sense of beauty and a prominence as a cultural capital city.

Lecce boasts a profusion of incredibly decorative buildings and architecture typically from the seventeenth century. It is an important university town, center for religious study, the arts and music and a town where you will be fascinated by its simple authentic rural life. What makes this city very special is that it is situated in the region of Apulia, a region that is still largely undiscovered and one where masses of tourists are still a few years off. Many travel publications, writers, travelers and leading food experts are quickly discovering the region and I can assure you that it will not stay that way much longer.

Wrested from the Greeks by the Romans in the third century BC, Lecce was subjected to relentless invasion in the centuries that followed, finally flourishing under the Spanish in the fifteenth and sixteenth centuries. Of ancient origins, Lecce experienced in particular two moments of prosperity: the Roman era and the Kingdom of Naples. At this time there was a large growth in the construction of buildings, monuments and mansions characterized by a magnificent and rich ornamentation that earned this typical architecture the definition of “Leccese Barouque,” which flourished from the sixteenth to the eighteenth century, a period of great prosperity and cultural dynamism. The eighteenth-century traveler Thomas Ashe thought it was “the most beautiful city in Italy.”

The heart of Lecce is the lively Piazza Sant Oronzo. This large piazza is dominated by Brindisi’s Via Appia column. This column was once one of pair that marked the end of the Appian Way at the waterside of Brindisi, and was presented to the city of Lecce. Now it is surmounted by the carved figure of Sant’ Oronzo, the Bishop of Lecce who was martyred by Nero in the first century AD. A feast in August celebrates this Patron Saint’s day with a palio. This is the ideal starting point and the best spot in which you can get a sense of the town’s eventful history, which is dominated by a statue of its patron saint on top of the two columns looking down on his citizens that mark the end of the Appian Way.

The remains of a Roman amphitheatre (pictured right), which in summer becomes the exceptional stage for theatrical performances, are flanked by the nineteenth-century Venetian-style buildings to the west and fascist-era palazzo to the north, with the Renaissance-Gothic Sedile monument plunked in the middle. This is a very busy spot, particularly at sundown, with a vibrant nightlife thronged with street performers, peddlers and strollers out to enjoy an evening gelato. Symbols of the Renaissance is the Palazzo del Seggio, known as the Seat, which today hosts important art exhibitions, and Chiesa di Santa Maria delle Grazie, with its beautiful frescos and wooden works.

A short walk from the piazza is the not-to-be-missed Santa Croce Basilica (pictured left), Lecce’s most celebrated church. It took nearly 150 years to complete this church. Several architects worked on this basilica in the sixteenth and seventeenth centuries and it constitutes the best example of the Baroque style of Lecce. The façade is beautifully decorated and a reminder that besides Rome, there were other cities in Italy of Baroque style and that the architectural style manifested itself well beyond the papal states. The upper part of the façade houses a wonderful rose window by Giuseppe Zimbalo and is richly ornamented.

When it comes to food, Lecce is hard to beat. Vegetables, oil, bread and pasta are the basic ingredients of Lecce gastronomy. Orecchiette, maccheroncini and tagliatelle are served as the first course. Condiments range from simple, fresh tomato sauce flavored with basil and pecorino or cacio ricotta cheese to rapini, tender lamb meat or fresh local fish.

There is one thing that you do not want to miss when you are in Lecce: the delicious pasticciotto Leccese! There is no other place in Puglia or in Italy where you can have it. People come from other towns and villages in Puglia simply to eat the pasticcioto, a sweet pastry tart filled with lemon cream that people in Lecce have for breakfast. Be sure to order it with an espresso or cappuccino and enjoy it in the Piazza Sant Oronzo.

What I love and remember most about Lecce is that people here live a simple way of life, whether its gathering for a family dinner, taking a simple walk in the piazza, participating in a local feast or simply gathering and socializing with friends. Life here is always been about making do, and over time the people of Lecce have developed a sort of genius for it. There is no shortage here of good places to pause for a coffee, cold drinks or gelato. At night, people enjoy a wonderful passeggiata. Two streets that you will enjoy spending your time in the evening are the Via Vittorio Emanuelle and Via Ferrante d’Aragona, both lined with great restaurants, wine bars, lounges and live music.

Lecce is a wonderful place to consider for your next vacation to Italy. You will find it all here: people who are very warm and friendly, excellent cuisine, beautiful climate, exceptional coastline, and it’s all very affordable.

Author’s note: Lecce will be one of the featured stops on the 15-day/13-night tour of the Best of the South and Sicily on September 16-30, 2010, which I will be personally escorting. For more information visit www.davincicustomtravel.com or email This email address is being protected from spambots. You need JavaScript enabled to view it..

Peter D’Attoma is the president of DaVinci Custom Travel & Tours. He has over 25 years of planning and designing independent, custom and escorted tours of Italy for individuals, groups and incentives. For more information call 330-633-2292.

View the embedded image gallery online at:
https://www.lagazzettaitaliana.com/region-of-italy/7608-lecce-puglia-s-city-of-baroque#sigProId0dac3bc6f4
More in this category: « Piazze d'Italia The Palio of Siena's fate »