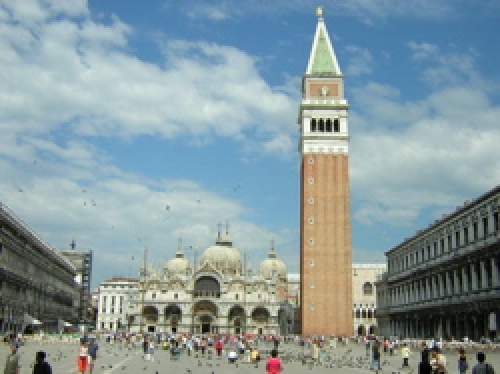 Italy contains one of the greatest numbers of squares (piazze) and historical sites in the world. Among these, we must point out Piazza della Signoria in Florence (situated in the heart of medieval Florence, it was the center of political and social life for the city); Piazza del Campo in Siena (constructed during the medieval times); Piazza dei Miracoli in Pisa (blanketed with grass, it took on its definite look in the XIX century thanks to architect Alessandro Gherardesca); and Piazza San Marco in Venice (pictured; defined the most beautiful square in the world: it is made of marble and opens up in front of Saint Mark’s basilica with its beautiful façade of mosaics and gothic details).

Piazza Navona and Piazza di Spagna in Rome, known for their famous Spanish Steps, was inaugurated by Pope Benedict XIII during the Jubilee of 1725 and designed by Alessandro Specchi and Francesco De Sanctis; it had been built to connect the Spanish Embassy (from which it takes its name) to the church of Trinità dei Monti.

In Naples, the regal and majestic Piazza del Plebiscito (pictured) is dominated by the basilica of Saint Francis of Paola. Commissioned by Pietro Bianchi in 1817, it was built by Ferdinand I after overcoming the French domination and completed in 1846 in full neoclassical style.

Piazza Pretoria in Palermo is referred to as the “Square of shame” by many Sicilians because of its nude statues. The Pretoria fountain, located in the center of the square, was built by the Florentine Francesco Camillani. Baroque statues of divinities decorate the entire square.

The word piazza comes from the Greek platis and stands for large and flat. It usually refers to an open space that is surrounded by buildings, restaurants, cafes, fountains and sculptures. In urban planning, a square is usually a place within a residential place. Today squares are used for different purposes: parking, markets or central squares where political and religious buildings can be found. In the past, squares were the center of democracy for many countries such as Greece where the ancient Agora was born. The word agora means to govern, to conduct -- it was here that all political, commercial and religious events took center stage, creating numerous interpersonal relationships where women were often excluded.

In Rome, the square took the name of foro (forum) and became majestic and monumental. Sometimes, it also served as a stadium such as the one built by Domiziano in 85 AD. The stadium was 275 meters long, 106 wide and could host 30,000 spectators.

During the same time period, Piazza Navona was flooded with water not for naval battles, but rather to fight the high heat. Three important fountains can be found here: the Fountain of Quattro Fiumi by Gian Lorenzo Bernini, the Fountain of the Moor sculpted by Giacomo della Porta and retouched by Bernini and the Fountain of Neptune, a work by Gregorio Zappalà and Antonio Della Bitta. Over time, a market was held here. It was later moved to Campo de’ Fiori, but many artists still gathered in this area to paint, draw caricatures of tourists and put on live performances. This square has also been the inspirational muse of many artists and poets like Gioacchino Belli, who dedicated to it a beautiful poem written in Roman dialect entitled Piazza Navona.

In Montecatini Terme (Pistoia, Tuscany), there is one of the most picturesque squares that served as inspiration for the novel Piazza d’Italia by Antonio Tabucchi. It was on this square that much of Italian history unfolded over time. It was also here that many high caliber Italian figures met to converse on a wide spectrum of political, economic and artistic affairs. Piazza d’Italia was Tabucchi’s first novel, written during the hot summer of 1973, and published by Bompiani in 1975. It is the story of emarginated and neglected Italians such as the rebellious farmers fighting against an unjust power, the story of Garibaldo who dies with a smile on his face knowing that he fought for what he believed in: the freedom to be a human being. In this square of Italy, Piazza d’Italia, history unfolds. Antonio Tabucchi is renowned for his work on Fernando Pessoa and the study of the theme of saudade (melancholy, nostalgia, the desire to relive a memory) throughout his literary work. In the introduction of Piazza d’Italia, Tabucchi writes, “This book is a memory, a long memory that opposes itself to the short memory of the mass media. I have always believed in literature as memory.”

The piazza of Italy is ultimately the memory of a people, of the people of Italy, it is their voice, their culture, their identity.