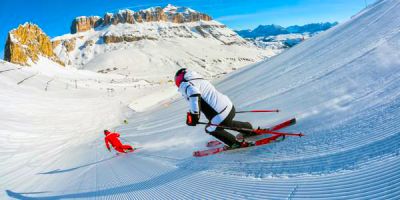 In the mountains of northeastern Italy, between the borders of Trentino and Veneto, lies the Marmolada, the highest mountain of the Dolomites (a section of the Alps). The Marmolada’s size bestows its nickname as “La regina delle Dolomiti,” the Queen of the Dolomites. Legend has it that long ago there were lush meadows on the Marmolada. One day, when two farmers chose not to observe a holiday, it began to snow heavily on the mountain and never stopped. From this point on, the mountain was covered by a glacier.

Located about 60 miles northwest of Venice, the north slope of the Marmolada, where the glacier lies, can be admired from all major lookout points across the Dolomites. The melting water of the glacier feeds the waters of Fedaia Lake below it. There are many hiking trails with breathtaking views to discover on the mountain.

The famous Marmolada cable car allows visitors to admire the beautiful landscape of the mountain and its glacier all year round. Malga Ciapela is the cable car’s departure station. Upon boarding, visitors can get off at Serauta Station to visit the Museo Marmolada Grande Guerra (Great War Marmolada Museum) which recounts the battles that took place in these mountains during WWI when they constituted the border between Austria-Hungary and Italy. Continuing up from the museum, visitors disembark at Punta Rocca (10,712 feet in altitude) near Punta Penia, the highest peak of the Marmolada. The Museo Marmolada Grande Guerra is the highest altitude museum located in all of Europe. Visitors experience war through the eyes of the soldiers; in the extreme conditions of their daily life - rocks, ice, freezing temperatures, and avalanches that killed more men than battles.

The Marmolada Glacier ski resort is a portion of Dolomiti Superski – the world’s largest ski region. Three beautiful little villages at the foot of the Marmolada glacier welcome visitors to ski, take part in other winter activities, explore the area, and learn trades like ironworking and woodcarving specific to this part of Italy.

The majestic views from afar of the Marmolada as well as the unforgettable views from atop the glacier are reason enough to add this destination to your bucket list.

View the embedded image gallery online at:
https://www.lagazzettaitaliana.com/people/9615-on-the-cover#sigProId79729c9d36
Tweet
More in this category: « A Look Back: A Magical Outdoor Theatre in Northern Italy The First Italian American First Lady in U.S. History »