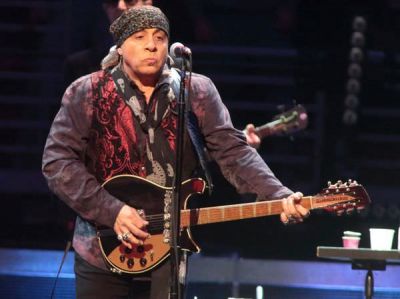 Steven Van Zandt is a unique Italian American musician and actor who often goes by the stage name Little Steven. As a member of Bruce Springsteen's E Street Band, he plays guitar and mandolin. He is perhaps best known for his role as Silvio Dante in “The Sopranos.” He also played Italian American crooner Jerry Vale in the 2019 film “The Irishman.”

He was born Steven Lento in Winthrop, MA on November 22, 1950. His maternal grandfather, Salvatore Lento, was from the region of Calabria while his maternal grandmother's parents were from the southern Italian city of Napoli. His mother, Mary Lento who was from the East Boston neighborhood, married a Dutch American man named William Van Zandt in 1957. She had split from Steven’s biological father, Vince Borello who had an awful drug addiction, a month before baby Steven was born. Borello's grandparents were from the southern Italian region of Puglia. William became Steven's adoptive father, which is why he bears his surname. In 1958, the new family moved to Middletown, NJ.

At age 12, Steven discovered his love for music when he learned how to play the guitar. He watched performances of the Beatles and Rolling Stones on the Ed Sullivan Show in 1964. George Harrison was his favorite Beatle as a youngster. At age 14, he formed his first band, The Whirlwinds, but the band split up after being together for a year.