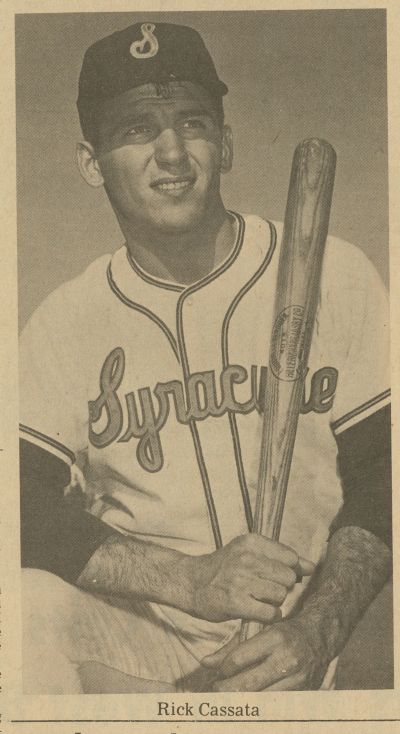 Rick “Rico” Cassata was inducted into the Greater Buffalo Sports Hall of Fame in 2002 for his quarterback play with the Ottawa Rough Riders of the Canadian Football League (CFL), winning the MVP award in the Grey Cup Championship in 1973 and highlighting a nine-year CFL career.

However, in 1964 after graduating from Tonawanda High School, Cassata had the opportunity to play shortstop for the New York Yankees, potentially, for two decades in the 1960s and 1970s, much like Derek Jeter demonstrated in his remarkable, two-decade journey into the Baseball Hall of Fame in Cooperstown, NY.

Cassata was the object of many baseball fans’ affections before being courted to play for the Yankees and even the Washington Senators, who both prioritized and drafted Cassata as their future franchise shortstop.

In fact, Cassata’s baseball and football contributions were recognized with the selection to the Niagara Frontier League (NFL) All-Decade Team for the 1960s. The hard-hitting and hard-throwing shortstop won the NFL batting title in 1963 as a 17-year-old junior, inviting baseball scouts to all his baseball games during his junior and senior years.

Cassata’s junior year was an awesome baseball season for the Tonawanda Warriors as he hit an amazing .422, winning the NFL batting title and leading the league in extra base hits. Uncommonly, Cassata possessed eye-catching, power-hitting skills for a shortstop like few others. Cassata’s stellar play in baseball unanimously garnered him the All-NFL and All Western New York honors in 1964.

Cassata had a complete baseball game. His batting skills were rare, special and appreciated. His hitting skills are still marveled at by those that saw it happen for themselves in those memorable 1963 and 1964 baseball seasons. “The stands would be packed, standing room only, when Rick played at home (Veteran’s Park) with fans and scouts from all over. Rick’s bat speed and hitting display was a thing of beauty,” remembers Allen Chester, a minor league baseball player from yesteryear and a longtime baseball coach in the city of Tonawanda.

After the lure of professional baseball was considered, Cassata decided on his passion and ultimately accepted a football scholarship to be the future quarterback for the Syracuse Orangemen, unknowingly joining future football hall of fame teammates Floyd Little, Larry Cszonka and Tom Coughlin in the fall of 1964.

Cassata was not allowed to take the diamond until his senior year at Syracuse, when his football scholarship service was completed. In the 1960s, scholarship athletes were forbidden from participating in other varsity sports. To no one’s surprise, Cassata was an impacting newcomer to the infield lineup and was one of the best baseball players as a hitter and fielder that year, after foregoing three years of possible eligibility.

“Rick Cassata is the best athlete to ever come out of Tonawanda,” recalls Larry Margaris, who played for the Tonawanda Warriors from 1962 to 1964, playing side-by-side with the multi-talented Cassata. “Football, basketball, baseball, boxing, pocket billiards, he could do it all.” Margaris expounded on what he observed: “There haven’t been a lot of quarterbacks who could throw a football like Rick. I would play catch with him and I would swear he was going to throw the ball through me. In gym class one time, I saw Rick throw a softball 302 feet.”

Given the major league prospect of signing with the Yankees back in 1964, Cassata admits even today that he would still choose football over baseball if he had it to do all over. He passionately affirms: “I love quarterbacking more than baseball still. At that time, I had to ask myself, do I want to be a quarterback or a baseball player? I wanted to be a quarterback. There was no other choice.” Admittedly, Cassata added: “It would have been nice to have had both pro football and pro baseball careers, but my knees could never be able to endure it.”

Tweet
More in this category: « Little Steven A Look Back: A Magical Outdoor Theatre in Northern Italy »