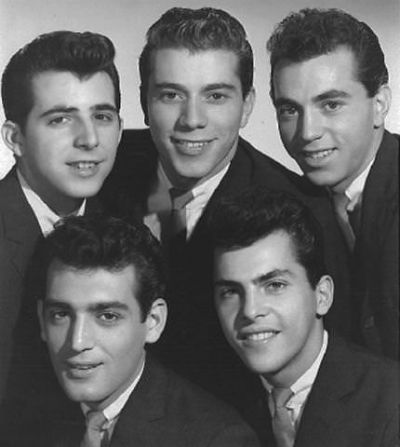 When five young Italian American friends from the Bensonhurst section of Brooklyn discovered that they each had talented voices, they started singing together as a group on street corners in 1957.

After being together for a short time, the singing group decided to call themselves the Overons. They started the group just for the love of singing and to perform their favorite doo-wop songs from their favorite groups.

The group's original lineup consisted of brothers Phil and Albee Cracolici and their good friends George Galfo, Bob Ferrante and Al Contrera. They were the Overons until some members disagreed with the name in the summer of 1958. Each member agreed to write a preferred group name on a piece of paper and place the papers into a hat. When Contrera's piece of paper was drawn out of the hat, the Overons became The Mystics. Contrera remembers coming up with the name by going through a dictionary.

Later that year, the singing group recorded two songs for Laurie Records: "Adam and Eve" and "Wimoweh." The record company was not satisfied with the results and had songwriters Doc Pomus and Mort Shulman write a song for the group. The songwriting team came up with "A Teenager in Love.” After some members disapproved of the song, Laurie Records decided to give it to Dion and the Belmonts who had major success with it, reaching number five on the U.S. pop charts.

Pomus and Shuman were asked to write another song for The Mystics. The following day, the songwriters returned with a song called "Hushabye." It became the first official single by The Mystics and their biggest hit song blasting to number 20 on the U.S. pop charts in early 1959. It spent nine weeks on the national charts. “The Big Beat,” Alan Freed's Saturday night TV show on ABC, used it as its closing song.

In the summer of 1959, Laurie Records released the group's second single, "Don't Take the Stars." The song was written by a young man named Mark Harris.

Lead vocalist Phil Crocolici left the group in 1960. Cracolici was replaced by another New Yorker named Paul Simon, who would later become half of the legendary rock and roll duo Simon and Garfunkel. Simon was in The Mystics for only a year until he decided to leave the group. The future star was replaced by another great vocalist named Jay Traynor in early 1961. Later that year, The Mystics decided to break up. Traynor went on to form Jay and the Americans.

The five original members decided to come together to reform the sensational doo-wop group in 1969. The group performed at festivals, weddings and night clubs in Las Vegas, NYC, Miami, Chicago, LA, and Atlantic City.

The Mystics split up again in the 1980s. In 2015, all five of the original members of the Mystics were inducted into the Doo Wop Hall of Fame in Cerritos, CA.

Tweet
More in this category: « A Look Back: Christmastime Little Steven »