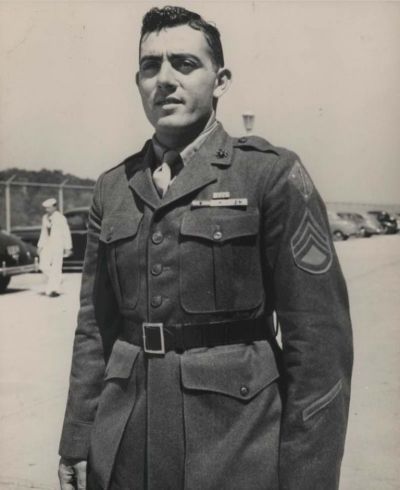 John Basilone was a United States Marine Corps Gunnery Sergeant and a proud American of Italian descent who was killed in action in 1945 during WWII. He received the Medal of Honor for heroism above and beyond the call of duty during the Battle for Henderson Field in the Guadalcanal Campaign and the Navy Cross posthumously for extraordinary heroism during the Battle of Iwo Jima. He was the only enlisted Marine to receive both decorations in WWII.

Basilone was born on November 4, 1916 in Buffalo, NY. His family moved to Raritan, NJ when John was 2-years-old. His father, Salvatore Basilone, immigrated from Colle Sannita in the region of Benevento, Italy in 1903. His mother, Theadora Bencivenga, was born in 1889. She grew up in Manville, NJ, but her parents, Carlo and Catrina, also came from Benevento. Basilone's parents met at a church gathering and married three years later.

He has received many honors including being the namesake for streets, military locations and two United States Navy destroyers. He was a true American hero. There is also a statue of Basilone in his hometown of Raritan, NJ.

Tweet
More in this category: « Joe Cool A Look Back: Hosting a Wine & Cheese Party »