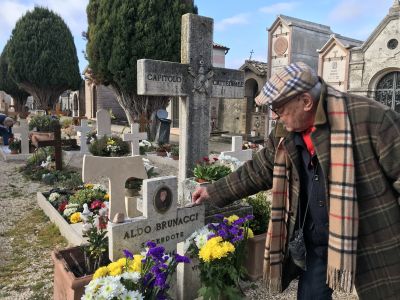 I could not remember the exact location in Assisi’s cemetery of the burial vault of Clara Weiss, an Austrian Jewish refugee who had died of natural causes in 1944 while hidden in Assisi. I was looking for it on February 2 before the ceremony honoring Don Aldo Brunacci, a man instrumental in successfully hiding over 300 Jewish refugees in Assisi in WWII. He, himself, had purchased the burial vault for Clara Weiss and the surname incised on the vault stone in 1944 had been “Bianchi” (“White”).

I did remember that she had been buried near the lower entrance to the cemetery where two men were quietly talking before visiting their relatives’ family mausoleums. I asked them, “Sapete dov’e la tomba della signora ebrea?” An elderly mustached man with a single crutch was just entering the cemetery and overheard my question. Using a branch of roses as a pointer, he indicated a burial vault with a star of David at the top and with stones bordering the base: “E’ qui la signora ebrea.”

The man asked me if I knew about the Don Aldo Brunacci memorial that morning. He certainly did as Don Aldo was a distant relative. When Signor Franco Bruno introduced himself to me, I realized that I knew many of his family members. He was at the cemetery to bring flowers to relatives and to care for the family mausoleum, very close to the Weiss burial wall niche. “I come every week,” he told me as he pushed open the door. ”And I’ll be taking flowers to Don Aldo, too, if you wish to come with me.”

Inside his family mausoleum, Franco placed the roses in a vase on the altar and then watered plants in front of some photos. “Ora, andiamo a comprare fiori per Don Aldo” (“Now let’s go buy flowers for Don Aldo”), Franco told me as he closed the door to the mausoleum.

The flower vendor clearly knew Franco and they chatted briefly as flowers were chosen. As he led me towards Don Aldo’s burial place, Franco told me, “he wanted to be in the ground, not in a mausoleum.” Pink and white cyclamen plants had been placed at the foot of Don Aldo’s grave and bright primroses planted in the rich earth. Tucking his crutch under his arm, Franco arranged his flowers in a stone vase and then watered them.

We both noted the stones left in gratitude and homage by Jewish visitors. Using his crutch, Franco pointed out to me the dedicatory plaque of the city of Assisi, placed there Feb 2, 2008, the year following Don Aldo’s death. The plaque pays tribute to Don Aldo as “priest of great culture and profound spirituality, commendable for his help to victims of political persecution, especially the Jews during the War 1940-1945, counted amongst the Righteous Gentiles by Israel.” We too paid tribute to this Righteous Gentile, placing stones on his grave in the Jewish tradition. We put the stones between the vases of flowers and under Don Aldo’s photo left in a plastic flowerpot dish next to his grave by grateful Jewish visitors.

As I left the cemetery, I remember Don Aldo telling me years ago about Clara Weiss’ funeral procession in 1944. He had led the funeral procession and as the mourners moved slowly out of the 14th century medieval gate of Porta San Giacomo, German soldiers standing guard there had clicked their heels and snapped a brisk salute as the coffin passed. As Don Aldo in tunic and stole softly said the funerary prayers, Jewish refugees in the procession had mouthed their own silently, walking together down the cypress-lined road to the cemetery.

On February 2, 2020, 13 years after his death, the city of Assisi once again paid tribute to this Righteous Gentile, dedicating a terrace to him overlooking the 13th century Basilica of St. Clare. Mille grazie, Don Aldo.