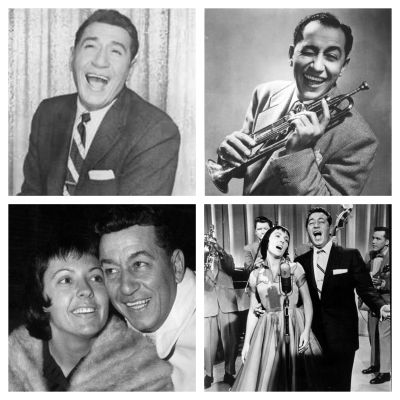 Louis Prima was a very talented Italian American jazz singer, trumpet player and bandleader. Fans knew Prima as a polite and friendly celebrity. He always signed autographs or posed for pictures with a smile.
He was born in New Orleans on December 7, 1910. His father, Anthony Prima, was the son of Sicilian immigrants from Salaparuta. His mother, Angelina Caravella, had immigrated from the small Sicilian island of Ustica as a baby. Angelina was a music-lover and made sure that all of her children played an instrument. Prima took violin lessons as a child, but switched to trumpet at age 15. He grew up on St. Peter St., in a section of New Orleans known as Little Palermo, near the French Quarter. Wandering around his neighborhood, Prima was introduced to jazz music. Local nightclubs such as Joe Segretta's, Matranga's, Tonti's Social Club, and Lala's Big 25 were popular nightclubs owned and operated by Italians.
Prima transferred to Warren Easton High School in the fall of 1926 where he played in the school band. In 1927, he partnered with musician Frank Federico and the pair played at The Whip, a run-down nightclub in the French Quarter. After finishing high school, Prima had a few unsuccessful gigs, but never gave up. He found a temporary job playing with the band on the “Capital,” a steamship docked on Canal Street. It was where he met Louise Polizzi, who became his wife on June 25, 1929.
Prima spent some time performing at the Avalon Club, owned by his brother, Leon. His first break was when Lou Forbes hired him for afternoon and evening shows at The Saenger Theater in 1932. Prima met Guy Lombardo while performing at the Shim Sham in the French Quarter during Mardi Gras season of 1934. Lombardo was impressed with his trumpet playing skills and felt that Prima would have more success as a musician in NYC. He took Lombardo's advice and moved to the Big Apple. He struggled to find work until he formed a band called the New Orleans Gang and landed a regular gig at a nightclub on 52nd St., The Famous Door. Around that time, Louise accused Prima of not being faithful to her. They divorced in 1936. He married actress Alma Ross that same year.
Prima performed at Billy Rose's Casa Manana in May 1938. First Lady Eleanor Roosevelt saw him perform in Washington D.C. in 1939 and invited him to President Franklin D. Roosevelt's birthday celebration. He appeared in photographs with the President which ultimately boosted his publicity.
Prima recorded his version of "I'll Walk Alone" in 1944. It reached number 22 on the U.S. pop charts. Despite the anti-Italian sentiment during WWII, he began successfully recording Italian songs such as "Oh Marie,” "Angelina" and "Bell Bottom Trousers" which peaked at number 6 on the pop charts.
Prima and Ross divorced in March 1947. He married Tracelene Barrett in 1948. Singer Keely Smith was only 20-years-old when she met Prima in August 1948. An amateur singer from Norfolk, VA, she auditioned to sing with Prima's band and ended up touring with them. The two recorded "The Bigger the Figure" in 1952. After Prima and Tracelene divorced, he married Smith on July 13, 1953. Smith and Prima were asked to sing together at the Sahara in Las Vegas in 1954. They started performing there regularly for the rest of the decade.
Italian American saxophonist Sam Butera was playing at the 500 Club in New Orleans, also owned by Leon Prima. Prima phoned Butera and asked him to be in his show. Butera agreed to it, but only if his small band was able to come along. Prima obliged and Butera drove with his band from New Orleans to Las Vegas.
At the first annual Grammy Awards in 1959, Smith and Prima won the first Grammy for Best Performance by a Vocal Group for "That Old Black Magic." They performed at John F. Kennedy's Inaugural Ball in 1961 and divorced the same year. Gia Maione took Smith's spot as the female vocalist in Prima’s band. Maione was a good-looking Italian American woman from Toms River, NJ. She was only 21. Prima and Maione wed in 1963. The couple regularly performed at the Sands Hotel in Las Vegas.
Louis Prima passed away on  August 24, 1978 in New Orleans, LA. He was only 68-years-old.