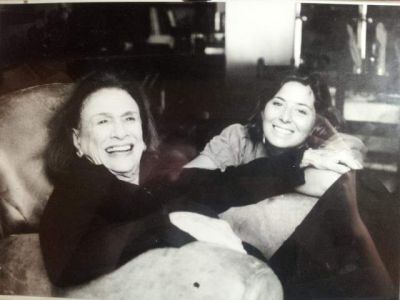 Beverly Pepper was an American sculptor known for her monumental works, site specific art (art created to exist in a certain place) and land art. Born in Brooklyn, NY in 1922 to Jewish immigrants, Beverly knew art was her calling from an early age. After studying multiple genres of art with many well-known artists, she chose sculpting as her calling after an eye-opening trip in 1960 to Cambodia’s temple ruins. She made her debut in 1962 with an exhibit of carved tree trunks at a gallery in Rome. After several exhibitions in New York and Rome, she was one of 10 artists invited by Giovanni Carandente to fabricate works in factories in Italy for outdoor exhibition in Spoleto. Beginning in the 1970’s, Beverly lived a bi-continental life between the U.S. and Europe, namely Todi, Italy. It was in this small Umbrian town that Beverly kept her art studio. Beverly Pepper died on February 5, 2020 in her Todi home at the age of 97.

My daughter Giulia had the wonderful opportunity to work with and befriend Beverly. “I always referred to Beverly as an ‘incredible’ woman. A word often used lightly but not when referring to a woman and artist like her. It was hard to believe many of her stories and achievements. It is hard to believe how free and strong-willed she was and how incredible her art is. I was blessed to have spent five years working at her side and then having her as a friend, a mentor, inspiration, and the embodiment of the woman I hope to be one day,” Giulia wrote.
Beverly’s obituary in The New York Times referred to her as a “sculptor of monumental lightness.” Beverly would have been pleased. “Monumental lightness” is so similar to “gentle force,” the term I had used in a past blog post to describe her sculptures. Beverly had read my post and was delighted with the title emphasizing the “gentle force” of her sculptures.
Four mammoth corten steel columns had been erected in Todi’s main piazza, Piazza del Popolo, in 1979. The columns towered in various art shows around the world before finding a permanent home in Venice. Todi honored Beverly with a show featuring replicas of her Todi columns in April 2018. Like stalwart silent giants, the four columns looked over Todi’s piazza until May 2019. In late summer, they were moved into Todi’s Parco di Beverly Pepper, dedicated in September 2019. It was the first park in the world dedicated to the sculptor and the first monothematic sculpture park in the region of Umbria.
When asked to comment on the 20 works she had donated to Todi’s Parco di Beverly Pepper, the 97-year-old sculptor said, “Many of my monumental works reach to the sky, seeking a tie with the landscape.” Beverly called the park “a huge door with many possibilities to those who wish to open it. I feel I have given the town a new energy; I feel I have transmitted courage and vitality.”
Giulia’s tribute to the late sculptor is unmatched. “Beverly, [you] were as important to me as my own parents in teaching me what life is and how we should live it:
courageously, dangerously (as you so often said),   freely, and fully.”

Tweet
More in this category: « The Wild Sicilian Legend From New Orleans I Am Who I Am: Nacy Panzica »