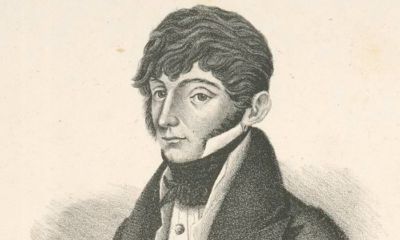 If I were to ask you to name a great guitarist, who would you name? If you are from my generation, you might say Clapton or Hendrix. If you are old school, you might go with B.B. King or Les Paul. If, however, you are really old school, and I am talking 18th century old school, you’re going with Mauro Giuliani – no known relation to that other Giuliani. While each of these guitarists stand out in their respective era, Mauro Giuliani changed music. His genius and skill with the guitar created a new role for the instrument.

Mauro Giuliani was born in Bisceglie on July 27, 1781. Early in his childhood, he moved to Barletta where he studied the cello and violin. Eventually, he abandoned the violin to take up the guitar, which took his life in an entirely new direction. In Italy, the guitar was seen as an accompanying instrument, rarely taking center stage. If Giuliani wanted to be a famous musician, choosing the guitar as his primary instrument was a poor career move. Certainly, he was a gifted cellist, taking part in the first performance of Beethoven’s Symphony No. 7. He easily could have had a successful career as a cellist. Yet, he chose the guitar.

Giuliani was like so many young musicians today who, feeling unappreciated, strap their guitar to their back and head off to seek fame and fortune in Nashville, Chicago or New Orleans. So, in 1806, understanding the Italian disdain for the guitar, he headed to Vienna to seek a more receptive audience. Being the center of the music world, the city attracted a number of other guitarists. Carcassi and Carullli, for example, also headed north leaving Italy behind. This concentration of talent in one place created a critical mass that exploded into an entirely new type of classical music, the classical guitar.

In Vienna, Giuliani at times worked and at times competed with these other guitarists, as he learned the classical style. Within a year, he began touring Europe and publishing his own compositions. He sealed his reputation as a virtuoso when he premiered his Guitar concerto (opus 30) with full orchestral accompaniment. This performance set a precedent, placing the guitar – and Giuliani – center stage, establishing it equal to other classical instruments.

Giuliani’s understanding and feel for the guitar brought him continued success and notoriety in Vienna. In 1814, he served as the virtuoso ororario di camera to Napoleon’s second wife, Empress Marie-Louise. In this role, he was her chamber musician and teacher. He also taught many members of the Austrian royal family. In 1815, he further expanded his fame by performing in a series of concerts in the botanical gardens of Schonbrunn Palace. Even today, classical guitar students study his practice exercises.

Despite his success, Giuliani had accumulated a significant amount of debt, resulting in the seizure of all of his assets. This prompted him to leave Switzerland in 1819 settling in Rome after brief stays in Trieste and Venice. Then in 1823, due to his father’s failing health, Giuliani started to visit him in Naples. There, finding a ready audience for his work, he began to perform as well as publish his compositions with local publishers. These concerts began to include his daughter Emilia, an accomplished guitarist herself. As a capstone to his career, he performed in Portici for Francesco I and the Bourbon Court. Shortly after, his health began to decline and he died on May 8, 1829.

When Beethoven was asked why he did not compose music for the guitar, he responded; “Why should I write for the guitar when we have Giuliani?” What better testimony can you have for Giuliani’s genius than this? It is impossible to capture in words the beauty of his music; you have to hear it. Therefore, I encourage you to listen to his work, beginning with his Opus 30. In addition to his original compositions, I recommend you seek out his guitar adaptations of Handel’s “Opus 107 Variations on a Theme” as well as Rossini’s overture to “The Barber of Seville.” They are beautiful works that – like Giuliani himself - are an underappreciated facet of our Italian heritage.

Tweet
More in this category: « Joe DiMaggio: How the Son of an Italian Fisherman Became the Symbol of American Baseball Gold Rush: Dave Turin's Lost Mine »