St. Francis of Assisi: The First Known Writer in Italian 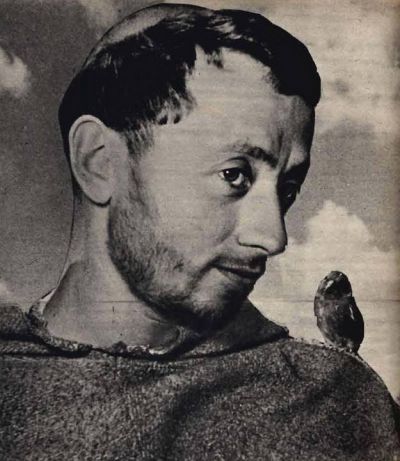 Saint Francis (1182? – 1226), born Giovanni di Pietro di Bernardone, continues as the world’s most popular Christian saint. Beyond the community of Roman Catholics, he is venerated in the Anglican Communion and among Lutherans. Many unchurched followers are devoted to him, as well. His efforts to reform Catholicism were earthshaking and stemmed from his humble, personal approach based on poverty and peace as tools of God. On those principles, the saint founded four religious orders. His feast is kept on October 4.

His achievements require a book. St. Francis is said to have created the first live nativity scene or presepe. When a wolf was threatening the town of Gubbio, he brought the townspeople together with the animal and struck a peace treaty. To stop bloodshed during the Fifth Crusade, Francis traveled to Egypt where he visited with Sultan, al-Kamil. Some sources say that as a result of the peaceful, cordial encounter with the sultan, Franciscans have had a presence there ever since. Moreover, the Umbrian-born saint is widely given the credit for also promoting peace as the key to relations between humans and the natural world. Francis, in the role of an early environmentalist, was the first, known by name, to write literature in the Italian language.

While we are familiar with the “Peace Prayer” that has been traditionally attributed to him – though many, such as the Loyola Press, claim it’s more recent – there is another prayer, really a poem. His “Canticle to the Sun” is a simple devotion in rhyme that can be sung. Latin, once the language of Western Europe for centuries, had ceased to be spoken by the masses. Yet, at the time of St. Francis, there was no literature in the new language, Italian. St. Francis was the first to write in the tongue of the people and he used it to good effect in this instructional prayer that teaches how to regard Creation as a positive force.

Composed in earliest Italian from the region of Umbria, the “Canticle of the Sun” uses words that would soon enter the modern Italian vocabulary, such as “iorno” for giorno, “onne” ogni, “nocte” notte, and “ke” che. While many Latin words can also be found in the text, the grammar and sentence structure are clearly Italian. In addition to the linguistic features that make this poem important for the history of the Italian language, the saint’s revolutionary theology expressed in the simple poetry of his 12th century prayer merits some mention.

The Canticle is a groundbreaking prayer for its time, and maybe even for ours. In it, nature is seen as a reflection of God and thus worthy of respect, for the natural elements belong to the same brotherhood as human beings. Contemporary views had cast the earthly terrain as a “vale of tears,” a punishment for Adam and Eve’s disgrace. On the other hand, St. Francis viewed in humankind a duty to act as skillful steward of creation, working respectfully with it. The sun, wind, and fire are all “brother.” The moon, water and earth are “sister.”

In modern times, Pope Francis took much inspiration from the thinking of St. Francis for his recent, urgent encyclical on protecting the environment. In fact, the title of the papal letter, “Laudato sì,” is a phrase taken directly from the Canticle. It means, “be praised.” Finally, if you’ve ever wondered why Francis preached to the birds and bargained with the wolves, read the entire Canticle for the backstory. If you’d like to listen to the piece sung, look for Angelo Branduardi’s lovely version from the album “L’infinitamente Piccolo.”

From the “Canticle of the Sun” (also known as “Praise of the Creatures,”) translation in Wikipedia:

“Be praised, my Lord,
through all your creatures,

especially through my lord Brother Sun,

who brings the day;

and you give light through him.

And he is beautiful and radiant

in all his splendour!

Of you, Most High, he bears the likeness.

Praised be You, my Lord, through Sister Moon

and the stars, in heaven you formed them

clear and precious and beautiful.

Praised be You, my Lord, through Brother Wind,

and through the air, cloudy and serene,

and every kind of weather through which

You give sustenance to Your creatures.

Praised be You, my Lord, through Sister Water,

which is very useful and humble

and precious and chaste.

Praised be You, my Lord, through Brother Fire,

through whom you light the night

and he is beautiful

and playful and robust and strong.

Praised be You, my Lord,

who sustains us and governs us and who produces

Praised be You, my Lord,

through those who give pardon for Your love,

and bear infirmity and tribulation.

Blessed are those who endure in peace

for by You, Most High, they shall be crowned.”