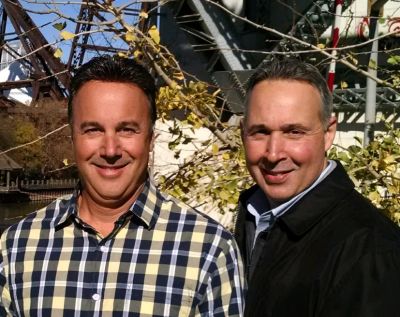 I recently had the opportunity to sit down with Jim and John Catanese of Catanese Classic Seafood. We explored their Italian heritage, how their family influenced the start of their company and how they envision the future of their business.

We began our conversation where it all started, with their family. Both sets of their grandparents came to America from Italy and married and settled in western PA to work in the coal mining industry. Jim talked about how hard they worked and how one grandfather, after work, covered with coal dust, would “come home and you could only see the whites of his eyes and teeth!” Both Jim and John were very close to their grandparents from whom they learned the value of hard work and loved being around. They discussed the ritual of traditional family Sunday dinners and how it was never missed when they were growing up. When asked how the tradition might have changed with their families today – “our families are all over the place, but when we’re together, it’s a special gathering.” The impact of the importance of family doesn’t stop there. They had a lot of family support when they started the business. John shared that their first delivery vehicle was given to them by their grandfather – a green 1971 Dodge Dart Swinger. “We started off with that and then moved on to a UHAUL truck, but that’s what we started off with,” says John. Their experiences in the food industry came with a few growing pains. Jim said he wanted to own a restaurant but quickly learned “you need money.” “I thought I could do anything at that age. I went to work in the restaurant business for a few years and the seafood business for a year and a half for someone else and I learned what to do and what not to do.” They soon created a small seafood business serving a couple local restaurants which taught them the difference between real, fresh fish and what everyone else was serving in the Cleveland area. They began to educate those restaurants on what fresh fish should look and taste like. The standards in their business were quality, variety and service. “These things are what really put us on the map” says Jim. Their first business, Waterfront Seafood, was in a space on Lakeshore Ave. that had wood floors and no loading dock – everything was loaded by hand. “Because of the weight of the fish, the floor would start sagging. The way we started out was comical,” Jim remembers. They later found a new location. Jim describes the space as “a storefront, a little kitchen we set up, a freezer and coolers…it also opened up a retail presence for us. We went from the smallest space of 900 s.f. and sagging wooden floors to now operating over 100,000 s.f. located in the city of Cleveland.”

When asked about their first big customer, Watermark immediately came to mind. John said they became their customer by accident. “We received one of their shipments and I ran it over to them. From there, they took a liking to us and used us ever since.” Their business continued to grow and they made more great relationships with restaurants around town. They were also able to develop a dedicated and loyal staff. “He who has the best employees and the best product wins,” said Jim. They sold Waterfront Seafood to a competitor and started a fish importing business for a few years. When their non-compete was up, they came back in 2004 to the distribution business creating Catanese Classic Seafood.

Jim recalls that the great staff relationships they created over the early years in the distribution and importing business helped them recruit their old employees back to the new company. “Our old employees wanted to work with us. It was easier for us. It was very rewarding and gratifying. It was like a second family.” said Jim. “We established ourselves with really nice people working with us. We had people that had passion and we built something with these people and it was great.” If there is a golden rule that the brothers live by in their business, Jim simply put it as that you want to treat others how you want to be treated. “It’s the key to success.”

When asked about the tough side of distributing fresh fish, the brothers said that there is a constant turnover of product and it’s a full, 7-day-a-week operation. “You’re on the clock…it’s not even here yet and you have to get rid of it” said Jim. “As much sales as we do every year and as much business, we don’t have very many fish in our coolers because we go to the airport every day, we get trucks in here every day and we deliver the same day.” This reflects the quality, variety and service they provide and what differentiates them from other distributors.

From starting with a green Dodge Dart Swinger to where they are now at 1600 Merwin Ave., Jim and John Catanese have their eyes on the future. They said they have continued to grow every year, expanding their business plan to include purchasing and distributing fish from Lake Erie. Their children have started to work with them and the brothers believe they are their greatest asset to the future of the business. Lastly, the theme that continued to be brought up in our conversation was that they continue to help their customer partners and their employees. The brothers truly want to continue to make a difference in other’s lives and watch them achieve their goals, too. “You do what you have to do. They remember it,” said John and Jim in agreement, “we all need to succeed.”