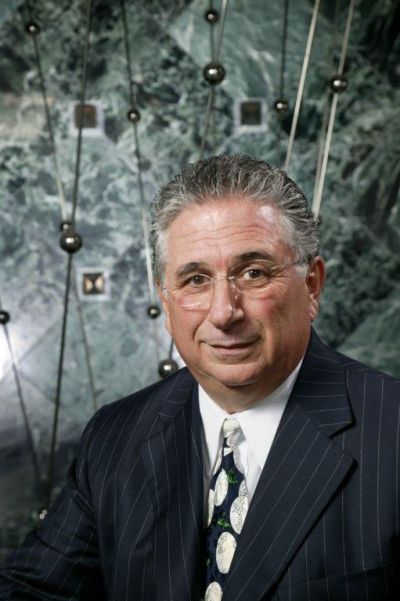 As the second edition to a series focused on Italian Americans in Cleveland’s Business Community, I turned to one of Cleveland’s seasoned business leaders and spoke with a man who takes great pride in his Italian heritage, his work and the city he’s helped develop. John J. Ferchill, Chairman and CEO of Ferchill Group, is a mainstay in the Downtown Cleveland real estate industry.

For a man whose business played an integral role in some of Downtown Cleveland’s largest projects of the 1990s, it’s surprising to most to learn that John Ferchill is not a native Clevelander. Ferchill grew up in New Philadelphia, Ohio, located in Tuscarawas County, far removed from the city life.

To anyone who knows John, there is no denying that he is outspoken with a strong personality. He brings great passion to all aspects of his life and that energy has made him and his business a success in cities across the country. John will be the first to attribute both his character and business skills to the driving force of his family: his Italian mother.

“The complete matriarch of the whole family and church,” says Ferchill, speaking fondly of his tenacious mother, whose family was from Foggia, Italy before immigrating to America. Seventh in the line of 13 children, Ferchill’s mother was forced to raise her entire family when her parents passed away when she was still a child. “She straightened out the whole family, just a strong Italian woman.”

Ferchill’s father was also Italian, the descendent of Sicilian parents who landed in Ohio for the coal mining industry. Like his wife, he was one of 11 children, raised in Roscoe, Ohio. John’s parents instilled a strong pride in their Italian heritage in the household and both played a large role in the town’s Italian community and Catholic church.

The perseverance forged in his parents’ personalities was passed down to him. In New Philadelphia, Ferchill excelled in school, graduating second in his class at Dover St. Joseph High School. However, he hastens to play down the accomplishment, saying “It wasn’t that notable, the class had only 50 kids.” Ferchill was one of the first members of his extended family to attend college.

Ferchill travelled to Cleveland where he attended Fenn College, paying for school by working at a co-op program and caddying at a golf course. He received his degree in electrical engineering in the college’s final graduating class before the school merged with Cleveland State University. Later, Ferchill was named one of the school’s top 25 graduates on Fenn’s 25th anniversary.

After college, Ferchill began working as an engineer at The Ohio Bell Telephone Company where he met, and later married, his wife Sharon when he was 25. Soon after, the couple were raising children in Cleveland.

Although he had an engineering degree, Ferchill wasn’t dedicated to the trade or Ohio Bell. “I was never going to make it in Corporate America.”

“My boss had just left [Ohio Bell] and started his own development company where he knew nothing. He told me how successful it was and asked me to join.”

He began working for the company called Building Systems and found an industry he could see a future in. After the business closed, John decided to start his own.

“At that time, I had three kids and $25,000 to my name. I had no idea what I was doing.” Despite the challenges Ferchill hit the ground running, and The Ferchill Group began.

He began his development career working on affordable housing projects in the Cleveland region, the first on the corner of West Blvd. and Detroit Ave. Throughout the 1980s, the firm developed its portfolio in historic renovation, gaining attraction from other rustbelt cities hit with urban blight.

Although the projects continued to grow in size and number, Ferchill says, “I was always struggling, so I started doing these smaller projects.” He began taking on consulting jobs such as stadium leases for teams like the Cleveland Cavaliers and Indians.

Then, in the mid-1990s, The Ferchill Group moved into the hotel business, opening the Hampton Inn in Downtown Cleveland. “I was astonished at the success. Then I realized the Cleveland Indians were responsible.”

This created a new ballgame for Ferchill, who began following ballparks to cities like Detroit, Pittsburgh and Kansas City. The hotel industry proved to be his niche, culminating in the prized jewel of the company’s portfolio: the $176 million redevelopment of the Book-Cadillac Hotel in Downtown Detroit which maintains a steady 89% occupancy rate since its opening.

Ferchill also played a significate role as a key developer dedicated to the revitalization of Gordon Square and the Mount Carmel neighborhood. He partnered with Father Frascati of the Our Lady of Mount Carmel Church to turn the Westside neighborhood around. “I was truly devoted to the project and the church. I still attend every Sunday.”

Lastly, as a man molded by a family-centered life, Ferchill has worked to help keep their families strong. In 2007, John and Sharon Ferchill became the benefactors to the Jennifer Ferchill Brain Tumor Center at Rainbow Babies & Children’s Hospital in honor of their daughter and her fight with the disease.

Ferchill attributes his life’s successes to his Italian heritage with its strong family ties, continuous faith and the fervency of an Italian mother. “I have no idea how I ended up as an entrepreneur with $25,000 in my pocket. But I’m a risk-taker,” Ferchill says.

“I am an Italian American with all those values, all of which come back to enrich me on a daily basis.”

Tweet
More in this category: « Croatti "Cleaned Up" in the Business Beppe Grillo: Entertainer, Politician »