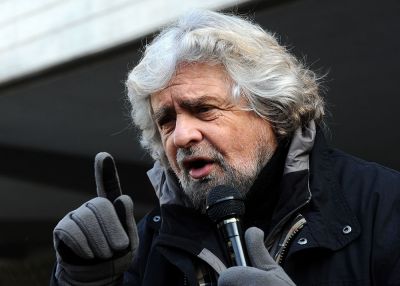 Born on July 21, 1948 in Genoa, Italy, Beppe Grillo, at an early age, demonstrated an aptitude for musical and comedic performance. He appeared in night clubs as a teenager and became a comedian by chance when he improvised an entire monologue at a local audition, giving up a short-lived accounting career. Just two weeks later, Pippo Baudo, one of the most famous Italian television presenters discovered him.

Grillo appeared on multiple variety shows throughout the late 1970s and early 1980s. His performances began to include political satire that offended some Italian politicians. In 1986, during a gig on the show “Fantastico 7,” Grillo attacked Bettino Craxi, then Italy’s Prime Minister and leader of the Italian Socialist Party, ultimately resulting in his banishment from publicly owned television. Grillo was vindicated, however, when Craxi fled the country under the spectre of corruption charges, on which he was convicted of in absentia in 1994.

Having established himself as a national figure, Grillo returned to live performances, touring Italy and mixing his comedy with political commentary. His wide network of fans sent him stories of corporate misconduct and his training as an accountant aided him in assessing the exact nature of the misdeeds. He incorporated the details of his investigations into his act which led some prosecutors to solicit his expertise. In 2003, Parmalat, a multinational Italian dairy and food corporation, collapsed in what is still Europe’s biggest bankruptcy. More than a year prior, Grillo was telling his audiences about Parmalat’s balance sheet irregularities.

Beppe maintains a blog in Italian, English and Japanese that is updated daily. According to Technorati, the blog ranks among the 10 most visited in the world and, in 2008, The Guardian included the blog as one of the world’s most influential. Grillo often receives letters from prominent figures such as Antonio Di Pietro (former Italian Minister of Infrastructures) and multiple Nobel Prize winners.

He was and is a strong activist for the removal of anyone in Italian politics who has been convicted of a crime. In 2010, Grillo started a political movement called the Movimento 5 Stelle, the “Five Star Movement” (M5S). He uses the internet to promote his ideals of an honest and direct democracy. The M5S is considered populist, anti-establishment, environmentalist, anti-globalist, and Eurosceptic. The movement became a party with electoral prospects in the 2010 regional elections and, in 2016, two members, Virginia Raggi and Chiara Appendino, were elected mayors of Rome and Turin, respectively. Grillo’s lifestyle draws much criticism from his critics.

They call him contradictory for once owning a motor yacht and Ferrari with his environmental stance on the world. He has been called Italy’s new Mussolini. Voice of protest for some, populist demagogue for others, Beppe Grillo has become a serious political player in Italy.