The Creator of the Big Mac: A Legend in His Own Right 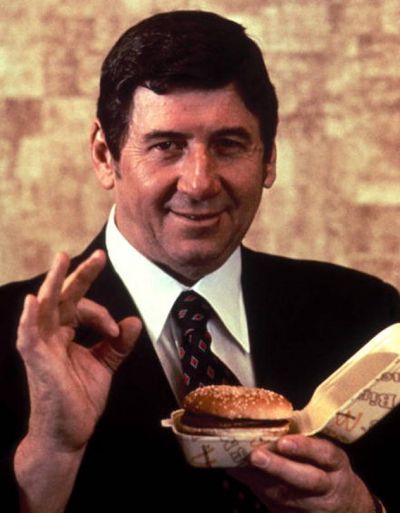 Ah, the famous “two all-beef patties, lettuce, cheese, pickles, onions, special sauce on a sesame bun.” The Big Mac was introduced to McDonald’s customers in 1967 for 45 cents. Within two years, it accounted for 19 percent of the company’s total sales. Franchise owner Michael James “Jim” Delligatti of Pittsburgh was the creator of the sandwich. He recently passed away at the age of 98. A family member reported that Delligatti ate at least one Big Mac each week for decades. McDonald’s sells about 550 million Big Macs annually in over 100 countries worldwide.

An Army Yankee Division veteran who served in Europe, Delligatti was born in Uniontown, OH, worked odd jobs until he hitchhiked to California where he worked in drive-in restaurants and managed a Big Boy.

Delligatti opened the first McDonald’s in western PA in 1957 after attending a Chicago restaurant trade show where he visited a McDonald’s booth, launching his interest in the franchise. He went on to open 47 more in the following 25 years, competing for business with the Big Boy and Burger King chains.

His legendary status was strengthened when he began serving a hot breakfast to local steelworkers coming off the night shift. And so the Hotcakes and Sausage breakfast meal also became part of McDonald’s national menu.

Delligatti opened the Big Mac Museum Restaurant in North Huntington, PA in 2007, with a 14-foot-tall Big Mac sculpture as its centerpiece.

When asked by The Pittsburgh Post-Gazette in 2007 if he reaped  billions for his famous creation, Delligatti replied, “All I got was a plaque.”

Tweet
More in this category: « Ciao, Matteo A Lesson I Couldn't Refuse »