Lorraine Dodero... driven by strong faith, deep family convictions and a passion to help others 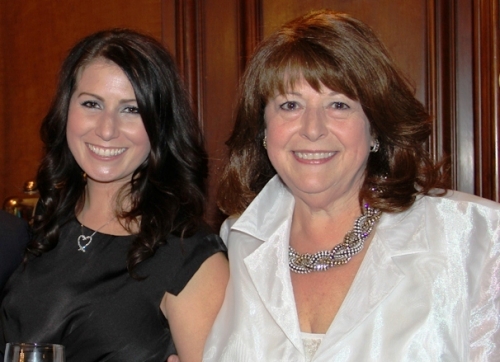 Her calendar is perpetually full and her energy is seemingly boundless. But when you have the opportunity to sit and chat with Lorraine Dodero, she makes you feel as if nothing in the world is more important than the time she's spending with you at that moment. The twinkle in her eyes and her infectious smile puts you at ease immediately-whether you're sitting in a committee meeting with her, having a cup of coffee in her kitchen or gathered at her table for one of the many benefits she supports. Being around Lorraine Dodero is a pleasure - and some would say, a privilege.

"She's an incredibly nice lady-a smart lady-and generous to a fault," says Umberto Fedeli, NOIA Foundation Chairman and President and CEO of The Fedeli Group. Dodero is a fellow Trustee for the Northern Ohio Italian American Foundation. "She is one special person and we're lucky in the Italian community to have someone like Lorraine Dodero."

A Cleveland native, Lorraine attended Normandy High School in Parma and went on to Ohio Northern University in Ada, Ohio to study pre-law "because my father told me that's where I'd make money," she laughed. But Dodero followed her heart and began taking art classes and eventually graduated with a degree in Art History which ultimately served her well in a number of ways.

"I actually started an advertising agency (Adverama) to serve my Dad's business while I was still in school and when I graduated I jumped right into it full time." Dodero built the business by pursuing other accounts locally, at first, provided not only advertising services but printing, as well. Eventually, she spotted a niche that was wide open for Yellow Pages advertising. Dodero ultimately grew Adverama into one of the largest advertising agencies handling Yellow Pages marketing in the United States. The company grew to more than 80 people and also expanded into point-of-sale display, fulfillment and promotional services for companies like Pepsi, Little Tykes and First Step.

Her penchant for giving and supporting causes that help the less fortunate, especially women and children, seems to come naturally to her. Indeed, she learned much about giving from her father, Sam J. Frankino, founder of Agency Rent a Car. In 1983 when her daughter, Corinne, was born, Sam gifted money to start the Corinne L. Dodero Foundation for the Arts & Sciences to help teach his granddaughter philanthropy. Dodero managed that Foundation from the mid-80s and began donating to organizations throughout Northeast Ohio.

Dodero's family launched foundations to support medical work, children's causes and the arts. She first joined the Florida Chapter of the Patrons of the Arts in the Vatican Museums in 1995, following her family's lead. In 2005 she launched the Ohio Chapter and made an immediate impact.

From the beginning, her involvement with Patrons of the Arts seemed a perfect fit to her. "It wasn't just my love of the arts that drove me to this organization. More so, it was because of my faith - my love of God. I felt a calling to take the art and show people the beauty of it. In Cleveland there was nothing that married up the two (love of art and love of God). This isn't a Catholic organization, per se, but all these works honor God and I just felt like this was a way for me to honor God by leading people to see His glory in these magnificent works of art."

Like everything she does Dodero jumps in with both feet when it comes to growing the Chapter and attracting new members. She also aggressively pursues restoration projects in the Vatican on behalf of the Chapter (as well as her family) and has managed to underwrite projects like the "Wooden Shutters in the Rafael Rooms", the Entrance to the Vatican Library, the Church of San Salvador in Vatican City (a family-funded project) and "The Collection of Cardinal Sfondrati", reliquaries that were excavated from St. Cecilia's Basilica and Monastery in Trastevere in 1599.

While Dodero is fully vested in the Patrons, she is equally committed to organizations and causes that support local women, children and medical issues. "I'm just really drawn to those who need help - those less fortunate," she says. "I guess that's why I was attracted to the Red Cross. It's an organization that seems to really encompass it all. Their shelters, their programs-all that they do." Dodero's family also was a major supporter of the American Red Cross of Greater Cleveland-an organization that recently benefited from a $1 million donation by the Dodero family on behalf of the Corinne L. Dodero Foundation for the Arts and Sciences and the Sam J. Frankino Foundation, two organizations for whom Dodero serves as Executive Trustee. She and Corinne also are members of the Tiffany Circle of the American Red Cross of Greater Cleveland, a Society of Women Leaders.

Northeast Ohio is blessed to have a number of philanthropic individuals, especially within the Italian American community, but the passion Dodero shows for the causes she supports is profound - and contagious. "Lorraine is the type of person who would much rather be in the background. She is not looking for accolades or getting her name out in front of causes, but she is there in a very supportive nature and has done an awful lot for the Northeast Ohio," says Merle Gorden, Mayor of Beachwood. "Her vision doesn't stop at the door. It goes way beyond that. She's a very creative person and she knows that to make something happen requires work and she makes sure that every minute detail is covered, no matter what it is."

Dodero and her family are drawn to support medical centers, too. She serves on the Cancer Leadership Board for University Hospitals Health Foundation. She is a regular supporter of the Cleveland Clinic Children's Hospital. In 2011 the Frankino-Dodero family also made a $3.5 million contribution to University Hospital's Seidman Cancer Center to build the Infusion Suite for cancer patients.

"I know some foundations have gatekeepers who are responsible for picking and choosing where they'll make their donations. I don't know that I could do that. I'm too self-driven. I want to personally help. I can't have someone else sorting through these opportunities," says Dodero. "I want to know that whatever we did, whatever we can provide will make a difference in someone's life. I hope it does." It's fair to say that those who benefit directly-and those who see what Dodero and her family do for others, recognize that the Dodero family is definitely making a difference.

Asked what she hopes her legacy is, Dodero is quick to say that it has nothing to do with having her name on a building or any such fanfare. "I want people to know that I am a woman of faith and my devotion to God and my family are what I want to be known for," she says.

Beyond all her philanthropic activities, Dodero will tell you, straight away, that her most important role is that of a mother. Dodero and her daughter, Corinne, are inseparable. Family and friends often marvel that they are like sisters or best friends. They genuinely enjoy each other's company and make time in their busy schedules to be certain they can be together often. "Family is incredibly important to me," says Lorraine. "It's part of my heritage as an Italian-American. My God and my family are at the center of my world-and always will be."