Joseph Mandato, a "Doughboy" from Collinwood 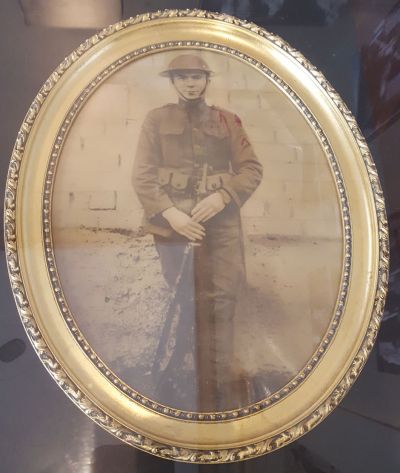 A photograph of Joseph (Giuseppe) Mandato in his WWI Army uniform hangs prominently on the second floor of the Highland Heights home of his daughter Victoria Mandato Thomas. It is placed so that Victoria can see her father every night before going to bed and guests can catch a glimpse from the home’s foyer.

Victoria is very proud of her father’s service as a “Doughboy” (a nickname for American soldiers) in the American Expeditionary Forces during WWI. Even though he was an Italian citizen, he volunteered to fight for his newly adopted country. In exchange, he earned his American citizenship.

Joseph Mandato was born in Gildone, Campobasso, Italy in 1896. He immigrated to Cleveland in 1912 at the age of 17 sponsored by his sister who had immigrated previously. Joseph enlisted in the army in Cleveland in June of 1918. He fought bravely in a number of battles, including the Meuse-Argonne Offensive initiated in September of 1918. It was part of the Hundred Days Offensive which helped to end the war.

After returning from the war in 1919, Joseph boarded in a home on E. 123rd St. in the Little Italy neighborhood and worked as a laborer. Several years later, he returned to his hometown of Gildone where he met and married Josephine Luciano in 1927. Joseph brought his bride back to Cleveland and settled in the Collinwood neighborhood in a double on Burnside Ave. He and his wife became proud members of Holy Redeemer Church and had three children, Mike, Jennie and Vicki. Joseph passed away in 1965 at the age of 69.

Victoria was kind enough to loan her father’s photograph and Enlistment Record to the Western Reserve Historical Society for display in the exhibit “A City Worth Fighting For: Cleveland’s Role in World War I.”  The exhibit covers four galleries, one of which is dedicated to telling Italian and Italian American stories of WWI, including Doughboy Mandato’s story. For more information about the exhibit, hours, and admission, visit www.wrhs.org or call 216-721-5722.