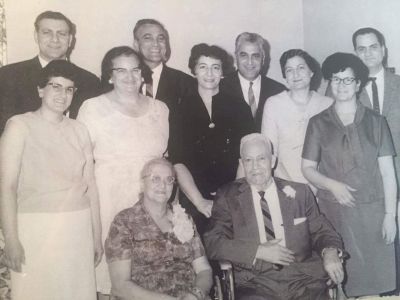 On the lower West Side of Youngstown, OH in the Steelton neighborhood, proudly stands a well-kept, red brick, three-story dwelling that is unique and a possible record holder in this city. 360 Elberen St. bares witness to the history not only of the city, but also of the former Italian en-clave of which it was a part of; and to a tightly knit Italian American family that has called it home for 107 years! Italian immigrant Vincenzo Domenico Di Muzio built this house in 1910, a home that has provided shelter and comfort to three generations of his descendants. I know it well and would like to share the Di Muzio story with you.

Before immigrating to Youngstown, around 1900, Vincenzo Di Muzio was a goat herder in Vittorito, L’Aquila, in the region of Abruzzo. In 1910, he laid down the foundation of what would become the family home. First built as a store, with living quarters located behind it, this small neighborhood grocery, known as Mingo's, would operate for years at a time when Youngstown had many such establishments catering to the burgeoning populations of European immigrants coming to work in the steel industry. A few years after he built the store, Di Muzio brought his betrothed, Anna Maria Liberatore, from Vittorito, whom he married in March of 1917. By this point, he had added a 2nd and 3rd floor above the store.

Vincenzo and Anna Maria Di Muzio had 11 children, 10 of whom were born at home. Children and parents worked together to make ends meet, especially during the tough years of the Great Depression. Daughter Alice Vitullo, now 88 and a resident of nearby Austintown, recalls a large stone bread oven in the backyard that served the neighborhood in the days before the city ran utilities to the area. As in Italy, the Di Muzios would receive a small fee for baking bread or pizza for neighbors. The home also had a well, now capped off, where water was drawn and sold to neighbors! The backyard had a large garden complete with grapevines for making homemade wine. During these difficult times, the children were tasked with walking along the nearby rail-road tracks to pick up stray pieces of coal for the home furnace. Anna Maria took in sewing, in addition to caring for her large family. Vincenzo found work with the Pittsburgh and Lake Erie Railroad.
At some point the store closed, but a 2nd kitchen on the 2nd floor would remain. As the children grew up and married, many of them moved into the family home with their spouses to get a start on married life. In fact, granddaughter, Karen Sefcik Dulany, believes some of the older grand-children were also born at 360 Elberen St. The family would eventually see a whopping 41 grandchildren and 66 great-grandchildren. Dulany says the family has lost count of great-great-grandchildren!

Around 1967, daughter Anna Marie and her husband Michael Sefcik, along with their children, moved back to 360 Elberen St. to care for her elderly parents. Vincenzo Di Muzio would pass in 1971 and his wife, Anna Maria, in 1972. The Sefciks and their six children: Michael, Karen, Robert, Ronald, Mark, and Linda would remain in the home and all graduated from Chaney High School, just like their parents. Sadly, Anna M. Sefcik passed in 2015. Mike Sefcik continues to make his home here with his son, Ron Sefcik, the current owner. The family has maintained a truly amazing written record of their family history: birth and marriage certificates, receipts for a ship's 1917 transatlantic passage, a social security card issued in 1939, and even a YMCA mem-bership from 1952.

I have many happy childhood memories with this family and continue a friendship with them that has lasted nearly all my 50 years. I would like nothing more than to see this home - and the family associated with it - prosper and continue for many, many more years. Certainly for at least another 107! Their story is quite exceptional, especially when you realize that the average Amer-ican moves every seven years!