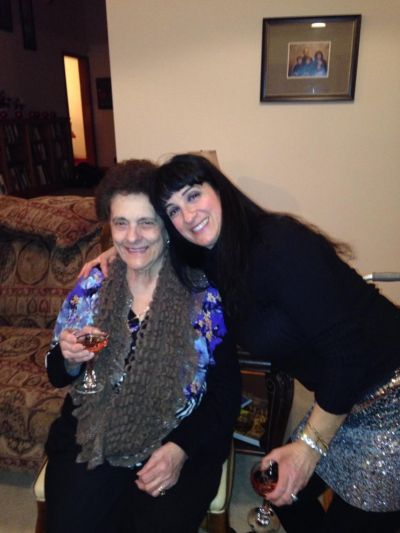 My mother, Maria/Mary, was born in 1931 in Sulmona, Italy during the Great Depression to parents of very modest means. Actually, her life was not much different from that of her parents or even her grandparents. The house had no running water or electricity and the only heat source was a single fireplace where the family did all their cooking. Women hand washed clothes in a nearby stream. All the water from the local outdoor tap was carried in the conca on the heads of women and girls, the same way it had been done for centuries. Of course, there was no telephone. Hers was a family of poor farmers; they had no animals or machinery to do the work. It was all done by hand.

When Maria was only two-years-old she lost her mother. Her father was away for years in the Italian army in the Spanish Civil War. Then in the Second World War, he was a prisoner of war. One time, my mother and I sat down and figured out that her father had lived with her about six years of her life. Fortunately, her grandmother, “Mammuch" Agata Valeri, would become her surrogate mother and the biggest influence on her life.

My mother worked in the fields from a young age. During the very hard years of WWII, she often toiled shoeless in irrigation water fed by snowmelt! The arriving German Army requisitioned her family’s house. The good news was that the Nazis needed electricity so they installed it. The bad news was they needed food so they took it. With the schools closed because of the conflict, mom was only able to achieve a 4th grade education. When the war finally ended, she went back to school but found herself an embarrassed 14-year-old sitting in a 5th grade classroom. She stopped attending.

My father, Salvatore, grew up a short distance from Mom and their families knew each other. They got engaged when she was 17, before he left to work in Canton, OH. This goodbye was in addition to others she would say to her father, stepmother and two sisters, all who left for better opportunities in Australia. She waited for our dad to return from the U.S. She stood by him, never faltering in her love, even after he was seriously injured by a drunk driver and took many months to recover in the U.S. and Italy.

After my parents were married in 1953, they immigrated to the Boston area to join my father’s sister, Aunt Toni. The newlyweds knew no English. Mom worked factory jobs in Boston. Eventually, my parents returned to Italy to see if circumstances had improved enough to allow them to remain. Mom told me that when she saw a neighbor wearing a highly-patched dress, she didn't want to end up in the same boat. She told Dad she was going back to America with or without him, and he went along!

After less than a year, they moved to Ohio to try their luck in Youngstown, where our beloved Aunt Tanny would help them get established. Mom was a homemaker, a caterer and an employee at St. Elizabeth’s Hospital, first in housekeeping and then in the sewing room. We lived in a very small two-bedroom “shot gun” style home with one bath about seven doors up from several major steel mills. It was a very humble home, indeed, but a place made forever special to all of us by the many great people who passed through there.

Years later, Mom worked alongside our father to build their dream home in Girard. I vividly recall her shoveling gravel at the construction site on Navajo Drive. She was that strong. The contractor couldn't believe all the work my mother was doing. He told Dad that Mom was like having another man working on the job! Hard work was always part of her life.

Her life was all about family, too. Left a widow at 53-years-old, she never considered remarrying. She devoted her life to her children and grandchildren. Babysitting, cooking and just spending time with us is what she lived for then. Even when mom traveled, it was with her family and usually to visit family. As is common in the Italian Diaspora, my mother’s family ended up on three continents. She was able to return to Italy multiple times to be with her sister, Pippinella, and visit relatives and old friends. In 1991, she and I spent five weeks in Australia with her sisters and with her many cousins who had emigrated there.

Mary Facchini was a humble, unassuming and tireless worker. Many people have serious reservations about visiting a non-English speaking country, let alone moving to one. With just a grade school education, my mother moved to a foreign country to establish a better life for herself and her children. It took guts, courage and determination on her part. She succeeded.

My mother passed away in November. It is my hope that she will be remembered for all the sacrifices she made for her family and the happiness and love she conveyed to us on a daily basis. She will always be in my thoughts. I will miss my mother every day for the rest of my life.