The Healthy Italian: A Tavola, Da Dove Inizia (At the Table, Where It Starts) 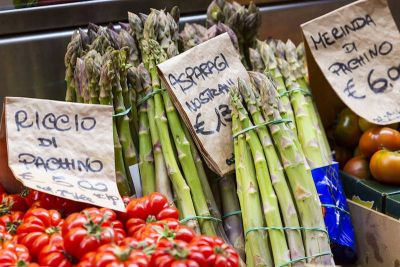 While researching “veganism in Italy” for my Italian class, I asked an Italian friend for help. This is an excerpt from what he wrote to me:

“What does being vegan mean? Vegan is a person who tries in his everyday life not to support the violence perpetrated towards other living beings. And with this in mind, a vegan refrains from eating meat, milk, eggs, fish or honey, does not consume products in which components of animal origin have been used (often used in soaps, cosmetics), does not attend shows based on animal exploitation (circuses, zoos, aquariums), and does not wear clothing made from animals (wool, silk). The concept of veganism is essentially very simple and always easier to put into practice thanks to the countless alternatives that are increasingly frequent."

Italians, though culturally conditioned to eating meat, albeit, very little red meat and who typically eat more fish, are turning away from eating meat altogether in part due to the inhumane treatment of animals on farms and also the meat-producing industry’s negative impact on the environment. Italy’s young people are more aware of the consequences of a meat-based diet and believe that a plant-based diet is better for health and the environment. In 2016, Harriet Barclay, European Outreach Officer for the animal rights association PETA said, “There are currently five million vegans and vegetarians in Italy, which is one of the highest figures in the EU.” From 2014- 2019, Italian vegans more than doubled. Vegans are no longer viewed as radical extremists like they were in the past.

Proponents of a meat-based diet claim that it is difficult to be vegan and not end up nutritionally deficient in some way or another, but as the owner of a vegan gelato shop in Rome says, “As with any 'restrictive' diet you need to know what you are doing or there could be negative consequences.”

And while the country may be famous for its cured hams and cheeses, Italy is surprisingly vegan-friendly with vegan food easy to come by because Italian cuisine is, by its very nature, vegan, that is, made without meat and dairy. You can find vegan dishes on the menu in pretty much any restaurant in Italy. And these are not token vegan dishes that restaurant owners have added just to draw in vegan customers like many American restaurants.

Before the industrial revolution, and even into the early 1900s, in many poorer regions of Italy, many Italians were vegan or vegetarian simply because they could not afford the luxury of meat. In our household, meat was always a small portion of the food on our plates which consisted mostly of greens and, naturally, pasta. As I compiled our family’s recipes for the biography I am writing about my mother, I found that her delicious “poor man’s dishes,” were already vegan to begin with—zuppa di scarole, pasta e fagioli and zuppa di broccoli e patate to name a few. They are my favorite childhood dishes and remain my comfort foods.

We are experiencing the consequences of how man has changed the environment in a negative way, from cutting and burning down rainforests that increase CO-2 emissions and replacing them with cattle ranches, to the massive consumption of hormone-laced meat leading to obesity and disease. The mistreatment of animals is being investigated and documented and released to the public for us to understand the consequences of our decisions.

Happily, Italian farmers are returning to their organic traditions of over a century ago, tending natural crops without pesticides or genetic modification. Just stop in any market or restaurant in Italy and taste nature!

View the embedded image gallery online at:
https://www.lagazzettaitaliana.com/lifestyle/9595-the-healthy-italian-a-tavola-da-dove-inizia-at-the-table-where-it-starts#sigProIdec278ef132
Tweet
More in this category: « The Healthy Italian: Italians and Longevity A Note From the Healthy Italian: Buon Anno Nuovo »