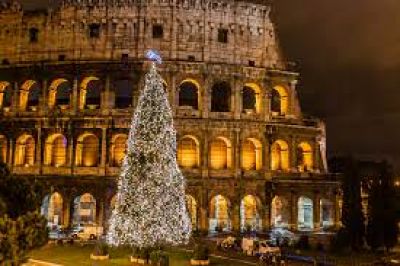 It is true that every culture celebrates holidays differently. Traditions vary from one region of the globe to the next. Christmas festivities differ depending on your religion, your geographic location and your family’s rituals. British children hang their stockings at the end of their beds hoping Santa Claus will fill them with goodies. In Kenya, many Christians attend a Midnight church service on Christmas Eve and then party all night. In Finland, it has become tradition to visit the graves of family members on Christmas Eve. Entire cemeteries are alight with glowing lanterns shining in the snow. In some parts of France, 13 desserts made of different types of fruit, nuts and pastries are eaten in celebration of the Christmas holiday. We may be partial but, to us, the Italians celebrate Christmas better than anyone. If you haven’t celebrated Christmas like the Italians do – it is time you did!

Italians extend every celebration as long as possible. Perhaps that way of life stems from the true celebration of Christmas. The Italians’ Christmas holiday begins on December 8th with celebration of the Immaculate Conception. It continues until the Epiphany on January 6th when the Three Wise Men arrived in Bethlehem. Christmas Eve is the most important date during the season.

The nine-day period before Christmas, or the Novena, is widely celebrated in rural areas of Italy. In remembrance of the shepherds’ journey to Baby Jesus’ manger, children dress as shepherds and travel from house to house performing Christmas songs and poems, often in exchange for money or sweets.

The tradition of presepi (or Christmas cribs) is widespread in Italian culture. During the holiday season, most churches and public areas have at least one nativity scene on display. It is safe to say most homes in Italy have their very own presepe depicting the holy family. The baby Jesus is usually added on Christmas Eve. If you happen to be in Rome over the holidays, be sure to visit 100 Presepi, the city’s annual international nativity crib exhibition. The event hosts over 100 nativity scenes from Italy and more than 40 other countries made from materials such as terracotta, sand, rice, metal, and more. On Christmas Eve, the Pope, himself, adds the baby Jesus to the Vatican’s life-size nativity.

We are all familiar with the Feast of the Seven Fishes. Many Catholic Italians traditionally fast during Christmas Eve and festivities begin after the evening mass with this seafood-starring feast. On Christmas Day, however, the Cenone (literally meaning “big dinner”) takes place. While the cuisine varies from region to region, usually a meat course is accompanied by pasta and followed by panettone, a sweet loaf of bread originating from Milan. Other desserts filled with nuts, which were historically a symbol of fertility for the coming year, finish the meal.

One of the most special traditions in Italian Christmas culture are the beautifully tied up letters. Addressed to their parents, beloved children express their love for the ones who raise them. The letters are usually read out loud after Christmas lunch.

Perhaps the most unique Italian Christmas tradition is that of “La Befana,” the old witch who brings presents on Epiphany Eve. Legend has it that the Three Wise Men came to her house and invited her to join their search for Christ. She declined as she was too busy with housework, but later changed her mind and, to this day, is still searching for the child, leaving presents for any good child she comes across.

While the typical American traditions of Christmas trees, wreaths, candy canes, Santa visits, decorating the house with lights, and tearing into gifts on Christmas morning are all wonderful ways to celebrate the Christmas season, including even one of the many Italian traditions

could be  the best gift of all.