An Anniversary Walk in the Euganean Hills 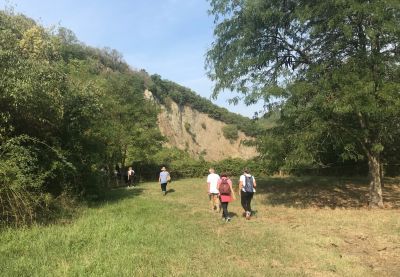 Visitors to Venice do not give a thought to the paving stones beneath their feet, but they should! The stone comes from quarries in the Euganean Hills about 40 miles away, and it was chosen because of its hard ridged, salt-resistant quality, perfect as a non-slip surface for paving a city based on water.

The lovely but little-known hills form a series of extinct volcanoes, now covered with vineyards and woods, and providing hot springs and mud for the three spa towns in the area. The quarrying began centuries ago, and by the early 20th century had begun to disfigure the landscape, damaging the symmetrical cone-shapes with huge scars.

Quarrying finally ended 50 years ago when a group of locals formed a protest movement, and the Euganean Hills became a Regional Park, an area of natural beauty. The 50th anniversary is a cause for celebration, and several local events are taking place now that Covid restrictions are being eased. The quarries are now partially covered with vegetation, but they demonstrate the geological history of the area and are themselves of great interest. With the microclimates which they create, they add to the pleasures of the many walks, with rare wildflowers, birds and insects.

One man, Antonio Mazzetti, has spent a lifetime researching the landscape and has written a book “I Nomi Della Terra” about his findings, patiently interviewing the inhabitants, even when initially threatened with being chained to a well because they were suspicious of this man asking awkward questions. His book covers just about everything there is to know about the Euganean Hills – from the formation of the volcanoes to the recent changes in land use, a love letter to his native territory.

To mark the 50th anniversary last autumn, Signor Mazzetti led a hike in the hills, and about 30 of us were lucky enough to follow and hear him, although I have to admit that as he spoke mainly in dialect, I did not manage to catch all he said!

We gathered near the beginning of the Ferro di Cavallo (horseshoe) walk in the small town of Battaglia Terme on a warm sunny day when the first signs of autumn colors were just beginning to show in the trees. This walk is one of 17 circular paths round conical hills in the area, all of which have different degrees of difficulty, but have in common a sense of peace, discovery, and great views.

We climbed a wooded path until we emerged in a clearing where facing us was a cliff of almost bare rock, a perfect spot for an explanation of the colored strata representing different eras of volcanic activity. The lower darker layer of basalt is, he explained, very hard, so was broken up and used for road surfaces. Our guide told a story (typically Italian!) of a time in the 50s when the River Po flooded its banks, and this stone was needed to help to shore up the banks. The quarrying company sent 20 lorries full of stone but claimed expenses for 40!

We continued on our way, noting several abandoned houses which had now been taken over by rampant vegetation. The once carefully tended vineyards were also completely overgrown. These large family houses were once occupied by tenants of the land-owning Obizzi family who built the fairy tale Castle of Catajo on the fringe of the hills. (See an Italy Magazine article about how this has recently been beautifully restored). The tenants were not paid but lived on what they produced after giving part of their produce to the landlord. Life was hard, with no means of escape from servitude, but they managed to make a little money by rearing silkworms. Many of the paths in the hills are lined with mulberry trees on which silkworms feed.

Similarly, there are other signs of imported trees and shrubs. Asian shrubs can be found bordering the woods, a characteristic being the leaves of contrasting shapes on the same plant. The explanation is that the seeds originated from the ornamental garden of the castle and in certain places have found a sympathetic environment in the microclimates caused by the quarries.

The tenant farmers also dug clay pits to make their own clay pots, not to be confused with a bomb crater near the railway tunnel which was a target in WWII. We scrambled up and over the tunnel on a narrow path bordered with pale purple autumn crocuses. It was on this track that I once watched a salamander crawling slowly along, but there was no sign that day.

Waiting for us at the end of the home stretch, through a vineyard where the grapes were sweet and ready for harvesting, was a van, labelled the ‘Hosteria Viaggiante’ (mobile diner) surrounded by tables and benches. I had seen something about it in the publicity for the walk, being “…sotto l’ombra degli olmi” but now I understood that it had parked beneath a small group of elm trees for shade.

The €5 menu was authentic and good value. We bought a numbered ticket and waited to be called, then collected a paper plate of orzo (barley) with shavings of parmesan, toasted bread with porcini sauce, and crispy fried balls made from wild herbs

from the hills. Local wine, appropriately named Terra Felice, accompanied the feast. The Regional Park of the Euganean Hills is indeed a happy land, as the wine label says.

Another version of this article first appeared in Italy Magazine in 2021.