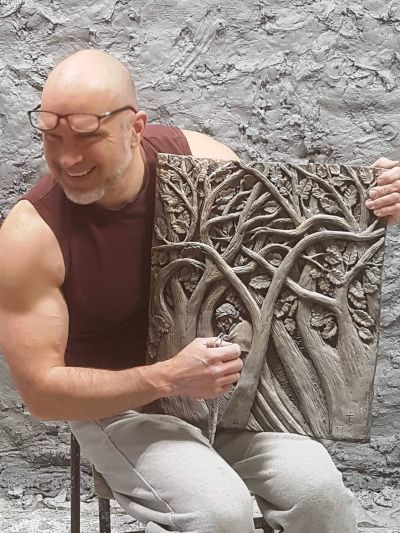 For over 25 years, Canadian artist Timothy Schmalz has been sculpting large scale sculptures. He is a figurative artist with his pieces installed worldwide. Some of his most reputed pieces are installed in historical churches in Rome and at the Vatican. A replica of Tim’s “Angels Unawares,” a large, bronze sculpture installed in 2019 in St. Peters Square in Rome, is currently on a one-year tour across the U.S.

For the past year, Tim has been working on a project to honor the 700th anniversary of the death of Dante Alighieri. “I believe Dante is one of the greatest writers of all time. So, I thought I would do what has never been done before. I think this is an amazing opportunity to celebrate not only Dante, but Italian and European culture.” The “Dante 700” sculpture project memorializes this significant anniversary with sculptures of each of the 100 cantos in the Divine Comedy. Very few artists ever represent more than the “Inferno” in their paintings and sculptures. This is a rare project that shows individual sculptures of all the cantos, including “Purgatory” and “Paradise.”

The University of Toronto, in the center of the city, is creating a Dante Park with all 100 of Tim’s sculpted cantos. Thirty of the 100 are now in Italy ready to be unveiled in Florence this month in the Badia Fiorentina, an abbey and church in the center of Florence. To mark the 700th anniversary, Tim will be sculpting the final 100th canto live on Sept. 13 at the Badia Fiorentina. Pope Francis is set to receive the very first cast of this piece in Rome on Dec. 8.

To see Tim at work is an amazing experience. He allows us into his creative world on his YouTube channel. Simply search ‘Tim Schmalz’ on YouTube to find him. Links are available on our website at www.lagazzettaitaliana.com.

For live streaming of events honoring the 700th anniversary of Dante’s death at the Badia Fiorentina, including Tim’s sculpting of the 100th canto, visit www.badiafiorentina.org/dante2021.