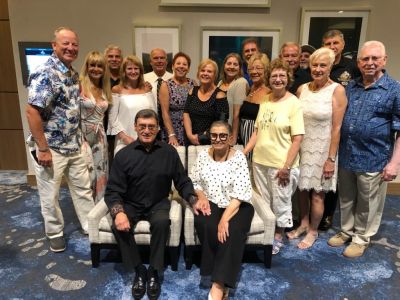 Robust financial and membership growth, trendsetting digital initiatives, and the reelection of Basil Russo were just a few highlights from ISDA's 45th National Biennial Convention.
Ninety-one years have passed since ISDA was founded, 45 National Biennial Conventions have been held, and in 2021 we’re proud to say that Italian Sons and Daughters of America is stronger and more influential than ever.
The latest ISDA National Convention was held last month in Cleveland, OH at the Downtown Hilton, and a rich slate of events took delegates and members of all ages on Rock ‘n’ Roll tours, boat cruises, Little Italy excursions, to high-rise meetings and grand ballroom dances.

A Timeline: From the Old School to the New Age:

2015: Basil and his daughter, Angela Russo-Otstot, launch the Italian Sons and Daughters of America website, a world-class digital hub that brings ISDA to the forefront of 21st-century communication.

2019: Basil, ISDA District National VPs John Viola and Pat O’Boyle, and John Deike start developing a documentary-style YouTube and Facebook series, Greetings From Italian America, that would explore the Italian side of America, one city/neighborhood at a time.

Here’s to another 90 years at ISDA, salute.