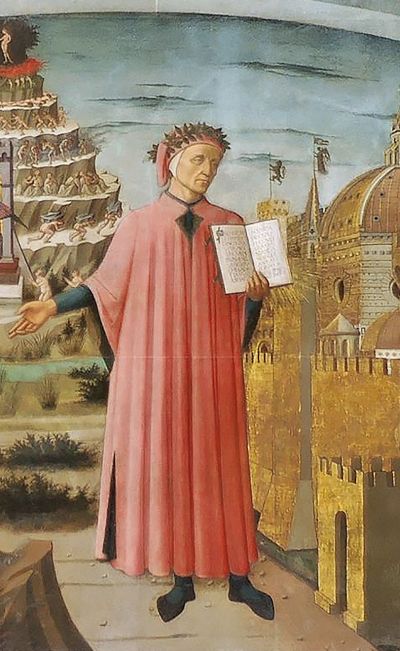 This September 14 will be the 700th anniversary of the death of the greatest poet of western literature, Dante Alighieri.

The claim of Dante's position in literature is more than the assertions of an Italophile. Eric Auerbach, the author of “Mimesis,” said that there is Dante and then all others. Michael Dirda notes that in the early part of the 20th century, "one important writer after another argues strongly for Dante – even above Shakespeare – as the central figure of European literature, the linchpin of the great classical and Christian tradition of learning and culture." For Italians, Italian-Americans, and Italophiles, Dante bears even greater importance than the rest of the Western World.

Dante has been described as the father of the Italian language, a prophet, and a secular saint. Dante called for a single unified Italy when Italy was still divided into city states who battled one another. While the church used its influence to seize temporal power and played Italians against one another, Dante called for the separation of church and state. In a time when each Italian region had its own language, further dividing the people, Dante called for one common tongue. He dreamed of a truly single Italian people more than 400 years before Giuseppe Garibaldi. Dante is important to all who love Italy and Italian culture for these reasons and many more, far too many to list here.

Much of what Dante believed, his philosophy, theology, political ideology, and insights into the human condition are in his most significant work, “La Divina Comedia.” Considering that this work is the cornerstone of Italian literature and Dante's significance to Italian culture, it is an important work to Italians and Italian Americans. Of course, it is one thing to say something is important and quite another to say why. What does it profit us to read Dante? Joseph Campbell, the comparative mythologist whose work was part of the inspiration of “Star Wars,” was asked why we should care about mythology. Campbell said, "Go on, live your life, it's a good life – you don't need mythology…but you may find that, with the proper introduction, mythology will catch you." So, technically we need not read Dante. I believe, however, that there is more to it.

We can happily live our lives without ever seeing the sunrise. We need not read literature or listen to music, or view paintings and sculptures. Even enjoying a meal is not necessary as long as we receive the nutrients required for survival. How many slaves survived on gruel for years? While none of these things are needed, per se, how sad existence would be without them. We would be like those slaves whose only food was gruel, surviving without living. Art, poetry, music are things that make our lives fuller, that enrich our existence. The same is true of Dante. We can happily appreciate Italy and Italian culture without any knowledge of Dante. Yet, what do we miss? What happens when “La Divina Comedia” catches us? This poem, this work will deepen and enrich your appreciation of Italian culture, making our Italian experience that much fuller.

To that end, to assist you in your experience of Dante's work, I would encourage you to participate in 100 Days of Dante with 100daysofdante.com. Let me begin by pointing out that this is free. Starting on September 14 and continuing for 100 days, you will join with other readers around the world in reading “La Divina Comedia.” Each day we independently read a portion of the poem. Of course, even Dante had a guide. Throughout this period, every Monday, Wednesday, and Friday, you will be provided short, accessible videos to guide you through the poem. During this time, we will come to understand Dante's unique perspective on life and spirituality, as well as the love of God and our neighbor.

Let's get together as Italians and Italian Americans to celebrate the life and poetry of Dante Alighieri. Let’s get caught by “La Divina Comedia.”