A Tribute to Italian Heritage in Los Angeles 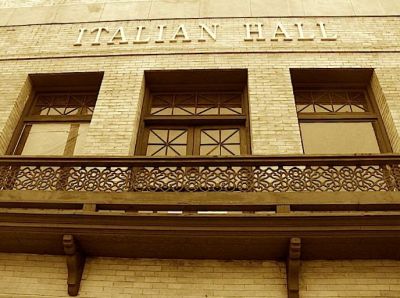 The Italian American Museum of Los Angeles (IAMLA) opened its doors in 2016 to tell the story of Italian immigrants in Southern California: their history now housed in the renovated Italian Hall, built in 1908.

The Italian presence in California dates back to 1683 when Eusebio Francisco Chini (known as Eusebio Kino), a Jesuit priest born in northern Italy, was part of a mission sent to lower California. Chini was also a cartographer and after several expeditions, he crossed to the Pacific Ocean and charted the land as a peninsula of California, not a separate island as previously thought. He is credited with drawing the first map of the area.

The city of Los Angeles was founded by the Spaniards in 1781; California was part of Mexico at the time. Within 40 years, along with migrants from other countries, Italian immigrants began settling in the area, and with a climate similar to Italy and opportunities for business success, by the mid-1800s, Los Angeles had a thriving Italian district; and the wine industry had taken hold. Many of the agricultural-based businesses there were started by Italians.

As the Italian American community grew, so did the need for a neighborhood gathering place, and a two-story brick building with decorative friezes and a mosaic-tile entry was constructed on Main Street. The Italian Hall was a cultural and social core, instrumental in the transition of Italian immigrant to Italian American. In addition to providing meeting space for numerous Italian organizations, the Italian Hall was also the place for local meetings addressing social issues of the time: labor conflicts, women’s right to vote and WWI veteran’s rights, among others.

By the 1930s, use of the Italian Hall declined and in the 1950s, it was purchased by the state of California, along with other properties, forming the El Pueblo State Historic Park. As part of the historic district, the building is on the National Register of Historic Places. Over the years, the Italian Hall continued to deteriorate until it was bought in the 1980s by a group in the Italian American community. The group became the Historic Italian Hall Foundation and began its plan to restore the building as a museum.

The City of Los Angeles and the Historic Italian Hall Foundation work together to operate the IAMLA. The exhibits in the 5,000 s.f. building are arranged chronologically to follow the path of Italians in Los Angeles, starting with “Italy’s Imprint on North America and the American West” as a prologue to Italian immigrants settling in the area. From there, its permanent exhibits showcase the pioneer Italian families who first arrived, the settlements that were established, discrimination and stereotypes, the movie industry and Italian culture “that embraces values shared by many people, including family and faith, the arts and food, innovation, work, education, and justice. The Southern California Italian American experience differs in many respects from Italian American culture in other parts of the nation…” providing “greater opportunities for self-expression and inclusivity than elsewhere in the country, where the confines of social class, ethnicity, neighborhood, and gender, were more entrenched.”

The Museum’s permanent exhibits are also presented online, richly detailed with historical facts, images and videos and include “Permanent Exhibition Study and Discussion Questions for Educators and Students,” a PDF for in-home or school classrooms. Under its Education department, the online “History” exhibit takes the viewer on a journey through “Southern California’s Italian Roots,” “Italians in Early L.A.,” “Los Angeles’ Little Italy,” and “The Birth and Rebirth of a Community Center.”

Additionally, the Museum’s collection “contains approximately 6,000 artifacts, photographs and archival documents,” with an online keyword search of its catalog that “displays many of the historically significant objects in our collection.”

Also on the Museum’s website, visitors will find a glimpse of the museum in its prior displays by viewing Temporary Exhibitions: among them, “The Sicilian Cart (2017-2018),” “Fantasy World: Italian Americans in Animation (2019 to 2020)” and the most recent, “St. Joseph’s Tables: Expressions of Devotion, Charity, and Abundance.”

For more about the Italian American Museum of Los Angeles, visit www.iamla.org/.

Tweet
More in this category: « La Ruota: The Wheel My Journey to Teach My Son Italian »