My Journey to Teach My Son Italian 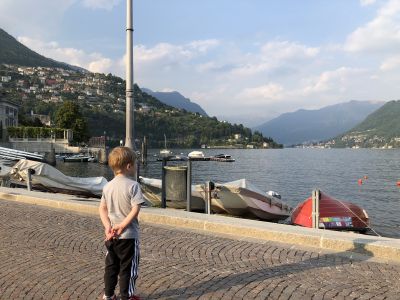 When my son, Alessandro, was born there was no question he would have an Italian name. I grew up Italian American, learned values from my immigrant grandparents and spent several years living in Italy. I also wanted to give him something I never got – a second language. Although my grandparents grew up in Italy, coming from regions with different dialects, they mostly communicated in English. My grandmother’s heavily accented speech was colored with some choice phrases in her Neapolitan dialect. Even as a young boy, I knew not to repeat them.

I got my first real taste of Italian when I was 12-years-old. My family traveled with my grandfather to the mountainous village of his youth near L’Aquila, Italy. I loved everything about it. The crowing of roosters was my alarm clock, I ate rabbit for the first (and last) time, started lifelong friendships with my abruzzesi cousins, and reveled in the challenge of communicating. I had no choice but to learn Italian, embarking on a journey that began with memorizing Italian on cassette tapes. I returned to Italy to earn a master’s degree in Milan and later again for work. As a non-native speaker, I may never be completely satisfied with my Italian fluency. But that was not going to get in the way of teaching Alessandro.

Since I first held him, I have exclusively spoken to my son in Italian. I sang and played Italian folk songs I learned in Abruzzo. As a baby, “Campagnola Bella” was the only one that soothed his crying. I found there were some words I had never learned, like diaper, gears, drain, puddle, playground equipment, rubber ducky, construction vehicles. I looked them up and watched YouTube videos to check pronunciation. I invested in a multi-region DVD player and have amassed an impressive collection of Italian language materials: scores of DVDs featuring his favorite cartoons and children’s books. “Il Piccolissimo Bruco Maisazio” and “Prosciutto e Uova Verdi” are two we have especially come to love. When Alessandro picks an English book, I translate it into Italian as best I can. Most Sundays, we learn about Italy together as we watch RAI Italia’s “Linea Verde” over a cappuccino and Mulino Bianco cookies.

As he began forming words, Alessandro said sì before yes and bottiglia (bottle) was one of the first things out of his mouth. At preschool, he would tell the teacher we need to wash his mani (hands) and discuss the Coniglio di Pasqua (Easter Bunny). He is English dominant but understands me completely and even gets annoyed if I try to speak to him in English. One day, when he was four-years-old, I said, “Oggi facciamo tiramisu.” He gave me a bewildered look and replied, “You’re too heavy!” We had never made tiramisu before, yet he understood that the dessert literally translated to “pick me up.” I was beaming with pride. In that moment, I realized that my son, born to American parents, would forever be connected to his roots.

Tweet
More in this category: « A Tribute to Italian Heritage in Los Angeles The Music »