From the Italian American Press - “A Camp Without Walls” 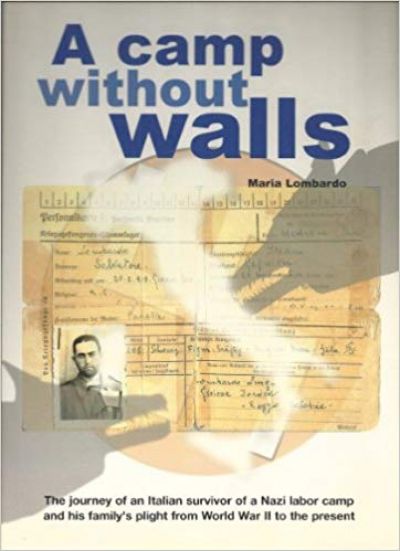 It is difficult to imagine how a war started in another country that happened before you were born could possibly affect your life. War is an interloper; changing with the times, the environment, the people, the circumstances. For some, war is a necessity. But for most, war is an intrusion, destroying lives, plans, dreams, hope, and oftentimes, faith. When Italy entered into an agreement with Germany and Japan to form an alliance, the lives of Italians and the Italian immigrants who had settled in America were tossed into turmoil.

In “A Camp Without Walls,” Dr. Maria Lombardo tells the story of her father, Salvatore, with accounts of his life in Italy during the rise of fascism, Italy’s involvement in WWII, his imprisonment in a Nazi slave labor camp, and – after being rescued from the camp – how the trauma caused by his imprisonment presided over his and his family’s lives.

By combining the diary entries written by her father with his and her mother’s verbal recollections and Maria’s own life experiences, “A Camp Without Walls” provides a rare look into the atrocities perpetrated by the Nazis and the aftereffects suffered by the survivors of their terrifying regime.

Maria remembers her “childhood in Martone [region of Calabria] was wonderful.” She often walked to the piazza with her father and listened to him “discuss politics and changes that could be made…to improve the lives of the townspeople.” Her father stressed the importance of education and told her “you cannot sit back and let things happen.” She also remembers the countless nights of hearing her father’s screams – “the unknown demons [that] were visiting in a dream.”

Her family later moved to Turin – where Salvatore worked – and when she was 10, they immigrated to America; but the horrors of WWII followed them in Salvatore’s dreams. Before Italy was fully entrenched in war, Salvatore had been in the Italian military as a mechanic in the air corps. During Italy’s active involvement, he was assigned to Libya, where Italy fought against British and American forces.

Assigned to Greece, he recalls “We had no explanation as to what we were doing in Greece. No long-range plan was ever presented to us. We did not feel part of any large operation, whereas the Nazis were unrelentingly focused on their cause. What was even more disturbing was the fact that we were supposedly allied with the Nazis, when we could not understand and identify with them, and they certainly had no interest in us.”

In Greece, Salvatore found the landscape and culture similar to Calabria and blended in with the townspeople. After Italy surrendered to the Allies in September 1943, “hundreds of thousands of Italian men were left stranded in parts of the Balkans [now known as Southeast Europe] with no indication of a course of action to follow.” Salvatore escaped the Nazis and – with help from the townspeople – became a resistance fighter.

Several months later, a newspaper article brought almost 300 former Italian soldiers, “homesick and lonely and tired of living in terror of being discovered,” to meet the Nazis, thinking “for all we knew, the war was ending, and the Nazis were helping us to get home.” Instead, the men were brutally transported to a prison camp with boundaries determined by the vicious barking dogs that surrounded them.

For many years, Maria questioned her father about the war, “there were still missing pieces to his story, there were always inconsistencies, as if the missing pieces were…far too difficult to communicate.” In her work with the National Italian American Foundation – at the time “a fledging organization that had just been started up” – Maria met Jewish survivors of the Holocaust who had been helped by the Italians and she began learning more about that time in Italy’s history. After her father was hospitalized for major surgery and going through rehabilitation, his doctor – recognizing Salvatore’s pain because his parents had also survived a Nazi prison camp – recommended Salvatore’s family “talk to him about the past and help him delve into his memory…” The pieces of a past life finally connected and Maria found a story that had to be told.

“A Camp Without Walls” is divided “into four parts: a personal story, a historical summary, a bibliography, and a resource guide…” Within are family retrospects; the politics and history of war in Italy from 1919 to 1947; the assimilation of Italian immigrants in America; an extensive bibliography of books, Internet resources and associations; a study guide about the Holocaust in Europe; and a gallery of illustrations – photographs, maps, brochures, paintings, and newspaper articles.

Maria writes, “This is a story intended to establish roots…May it serve as a model for all other families, encouraging them to delve into their past and their history so that they may record their own story for their children and grandchildren.”

Tweet
More in this category: « Bound for America: The Padrone System of Contract Labor (Part 1) You're Invited to a Jewish Celebration! - What You Need to Know... »