The Connecticut Street Italian Festival of the Late 1970s: Cultural Images That no Longer Exist 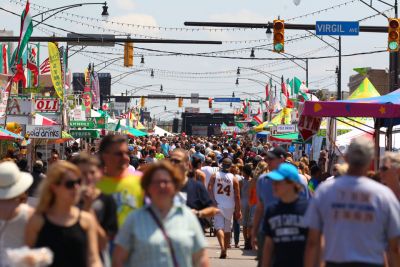 Buffalo's old West Side, the 1970s, remains indelibly etched in my childhood memories because it was a simple yet prosperous time in Buffalo's rich, cultural history. It represented a special time when the West Side resonated with an old-country, Italian cultural flavor that was prominent in everything we did in our daily living. Importantly, it was a socially-significant and progressive time when Italian Americans came together, galvanizing, sometimes by necessity, on the West Side to forge a new, American identity while collectively maintaining the proud cultural, vocational and religious values instilled and experienced in sunny Italy.

Promoting old-country Italian values was unveiled as the theme and impetus behind relocating the Italian Festival to Connecticut Street on the old West Side in the summer of 1976. Connecticut St. was strategically selected because it was in the heart of Buffalo's Italian American community. "We are trying to recapture the old St. Anthony tradition. We are trying to revive the old ways of bringing people together," announced Chuck Griffasi, the 1976 event chairman. The Connecticut St. site certainly achieved that and much more. The Italian Festival was originally named "La Festa di San Antonio," in honor of Saint Anthony of Padua, Italy. It was formerly celebrated in downtown Buffalo at St. Anthony's Catholic Church on Court St. with the festivities taking place in the Canal District known as "The Hooks."

The four-day Italian festival kicked off each July with a Catholic procession elevating the beautifully-decorated, life-size statue of St. Anthony holding the baby Jesus on a platform (at shoulder height) on thick, wooden rails and supported by six strong Italian men (three on each side), who were honored to literally shoulder and proudly display San Antonio that day. In the crowd, you could hear the native Italians repeatedly shouting, "Viva San Antonio," which translates to "Long live Saint Anthony."

The Connecticut Street Italian Festival was a small, quaint and authentic celebration and it had a distinct, Italian cultural imprint. Virtually all the vendors were Italian immigrants or first-generation Italian Americans, selling delicious Italian food and imported Italian memorabilia. The mouthwatering aroma of grilled sausage, onions and peppers was so inviting and permeated everywhere.

Live Italian music was performed by local artists like Chuck Cardone, the barber, and ensued all day long, one band after another it seemed. It featured the Italian dancers, games of chance, children's rides, the Ferris wheel, and much more. Then, the Italian Festival would crown its festival queen who would graciously address the festival-goers in the Italian language: a cultural tradition that is no longer. The cultural uniqueness of the Italian Festival on Connecticut Street remains a special memory to me.

Being Italian means everything to me. It exuded through me in multiple ways: the way I thought, my family, my friends, the language, the religion, the food, and the music. Sometimes I wish I could go back to 1976 and for that one day experience again those vivid, Italian cultural images proudly on display at the Connecticut Street Italian Festival. Admittedly, I don't think I will ever stop yearning for and reminiscing about that special time, the1970s, when Italian culture and pride was at a zenith and so tightly woven and expressed in our everyday activities and living contexts on the old West Side.