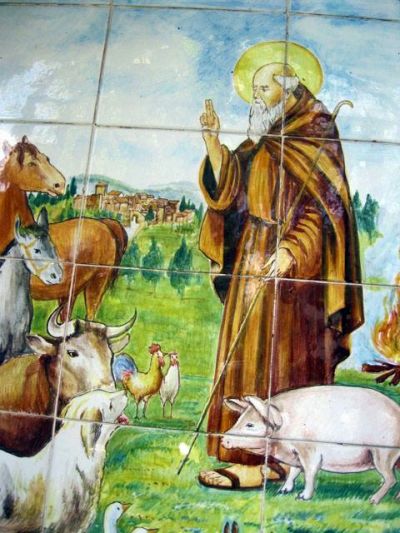 St. Anthony Abbot, much venerated throughout Italy, is a hermit saint who died in the deserts of Egypt on January 17 in the fourth century (not to be confused with St. Anthony of Padua, a Franciscan saint of the 13th century). Legend has it that during his periods of prayer and fasting in the desert, his only companions were the animals. Occasionally, the local people brought him bread. Like most Italian feast days, the Feast of St. Anthony is intertwined with the ancient Roman world. The long period between the winter solstice and summer equinox was replete with festivities and rites of purification of the animals, the fields, the people – propitious offerings for fertility and regeneration of the cosmos. Today, under the veil of religious feast days, local customs are tied to those ancient rites of fecundity and regeneration. The blessing of domestic animals on the Feast of St. Anthony was considered auspicious, keeping away evil forces from the home and land bringing fertility. A classic element of the lives of most hermit saints is the continual struggle against tempting and tormenting demons during their periods of isolation. So too in the life of St. Anthony, although he turned the tables! A Sardinian legend has it that during his life there was no fire in the world and the people appealed to St. Anthony, who went to knock on Hell’s gate, accompanied by his little piglet (the hermit’s only companion). The terrified devils – who knew of his powers and considered him invincible – refused to open the door. The piglet, however, squeezed in through a slit and frolicked about the devils’ abode, tormenting them. The desperate devils beseeched St. Anthony to come into Hell to get the pig. As the Saint and the joyful piglet returned to earth, the Saint’s walking stick caught fire and so warmth was brought to earth. St Anthony’s iconographic symbols in art are the walking stick and the piglet and he is the bearer of fire, that is, life. In fact, the night before his feast, in rural areas, it is still customary to light huge bonfires. The ashes from these bonfires were once considered amulets. Since time immemorial, fire has represented purification and, in this case, the burning of the old year including all its evils and maladies. In popular culture, St. Anthony is the dominator of fire and the healer of shingles, also known as “St. Anthony’s fire.” In the middle ages, the lard of a pig was used as a salve for shingles, perhaps accounting for the association of St. Anthony with this illness.

For Italians, St. Anthony is the protector of animals. Until a few years ago, farmers were given an image of St. Anthony to hang on their stalls. And even today, all oxen stalls in Umbria are guarded by this saint. When we moved to our farmhouse in 1975, it had been abandoned for 10 years, but St. Anthony was still there, on the wall under cobwebs and a dusty patina.

On his feast day, January 17 (or the closest Sunday to that date), animals of all sorts are brought to the entrance of a local church to receive a blessing. After the blessing, the people and their animals receive the pane Benedetto (blessed bread). Here in Assisi, a statue of St. Anthony is in front of the little Assisi church where all animals are brought for the afternoon blessing. At the foot of the statue is a basket of red bows for each of the larger animals to wear. All locals enjoy the day of the blessing of the animals here in Italy.

Tweet
More in this category: « NIAF Gives $450,000 to Norcia Community as it Recovers from the Traumatic Earthquakes The Connecticut Street Italian Festival of the Late 1970s: Cultural Images That no Longer Exist »