From the Italian American Press - "Vina, A Brooklyn Memoir" 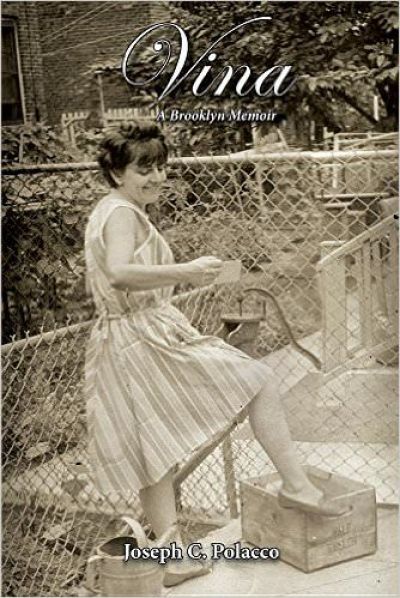 One of the most important ways to preserve Italian American culture is with the stories of our ancestors. Through written accounts, these memories provide not only family records but also historical value.

Joseph C. Polacco was inspired to write about his mother, Vina, because it was the link to his Italian heritage; a connection back to his old neighborhood in Brooklyn New York and a tribute to a woman who was a “human beacon.” Joe writes, “I mourn her passing as the dimming of a light in so many people’s lives” and “I feel her star is receding and her light is slowly fading.”

Joe shares the stories of his mother’s life and “the colorful characters Mom associated with,” as she presided in their home – known informally as The Brooklyn Rescue Mission – and later in her apartment on 77th St. There’s Mrs. Epstein, the used clothing store proprietress; Florie, not into cooking and eating but “comfortable with a scotch and a cigarette;” Guilio, who argued with Vina “about everything, especially food and food preparation;” Large Mary, who loved all children; Sandy (Santa), Vina’s “guardian angel;” Rose, Mary and Georgette “talented and accomplished … Sicilians who belie Hollywood stereotypes;” and a cast of many more – each merging their life with Vina’s.

In a conversational writing style, Joe describes scenes from Brooklyn: “On 86th Street in Bensonhurst, if you’re picking through produce when a bunch of new carciofi (artichokes) or string beans is dumped on the stand, you have to fight a gaggle of aggressive ladies (and a few brave, battle-hardened men) on the lookout for the prime specimens. The MPB [Most Precious Blood Parish] summer street festival was typical – with the processional Madonna draped in dollar bills, a raised stage of fazools singing ballads from the old country, games of chance, and the aromas of freshly shucked clams, deep-fried zeppole and sausage and pepper sandwiches.”

He recalls, “On the topic of crooners, Mom told me of going to the Brooklyn Paramount in her youth to take in a performance of Louis Prima. … Louis is on the stage and people in the audience are eating pizza. He must have been on his third show when he says, ‘Sheesh, am I hungry and that pizza smells so good. I wish I had a piece.’ Of course, he is bombarded by pizza.”

Interspersed with his first-person accounts of life with Vina are narratives from others whose lives were affected by his mother. Fond memories of Vina, “she was superb – a marvel in clothing design” and how “her contributions on this earth were unmistakable,” that she “was always the first to volunteer,” and who “always had a punch line.”

Her grandson Joseph writes “We were watching one of her favorite shows and it goes to commercial. A Victoria’s Secret commercial comes on … we both stare at it in silence for about ten to twenty seconds while half-nude models are displayed in lingerie (definitely not your iconic Noni-grandson moment). All of a sudden, Noni exclaims, ‘Victoria’s Secret? What’s the secret?’ and instantly the awkward silence turns into both of us rolling in laughter…”

In relating the vignettes, Joe shares how the strength, humor and compassion of Vina influenced his life. “I realized that the stories were as much about me as about Mom … My brother and I were the motivation for Vina’s struggles, travails and sacrifices,” but through all the hardships Vina brought “joy and comfort and humor and recipes and clothing and, yes, gossip to the many who loved her.” He notes, “Mom lived in Brooklyn all her life, but the old country, Southern Italy, the Mezzogiorno, was inside her. It shone through all of her interactions and it figures in the stories of ‘Vina.’”

“Vina, A Brooklyn Memoir” offers a nostalgic look into the past. It’s a return to another era that includes a ride along the old West End Line – from Coney Island to 57th Street (south end of Central Park) in Manhattan – and a glossary of (mostly Italian) words commonly used at the time.