The Pieta: the Signed Work of Michelangelo 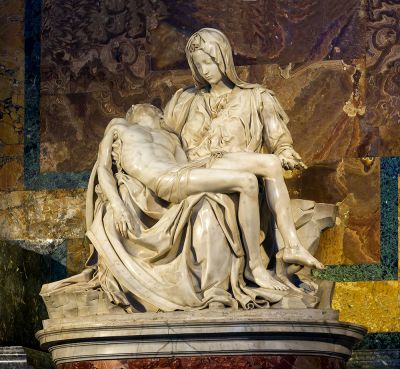 The Pieta (“the pity”) is known by many as one of Michelangelo’s greatest works. Sculpted from marble in the years 1498-1499 before Michelangelo was even 30 years old, the Pieta depicts a common religious subject matter that many artists all over the globe had recreated in Michelangelo’s time. This common theme was the Virgin Mary holding Jesus’ body across her lap after his crucifixion. Michelangelo had a somewhat different perspective about this subject, which he reflected in his work.

Michelangelo believed that the marble he used for this statue was perfect and the resulting artwork was no less. Although artists of varying locations such as Germany and France have already carved smaller statues of Mary and Jesus from wood, Michelangelo triumphed in artistic perfection by using an enormous marble piece for his creation. The statue still remains in St. Peter’s Basilica in Italy while reproductions of the piece are spread all over the world.

Several factors separate Michelangelo’s Pieta from others. With fine precision in draping and detail, Michelangelo’s Pieta depicts the Virgin Mary cradling her son after his crucifixion, except, unlike most artists, he decided to give Mary a youthful appearance to demonstrate her closeness to God as well as a reflection of her internal beauty. The statue has an immense lack of proportions that an average onlooker might not notice at first. Mary, although her body is mostly hidden by her draped clothing, is actually over 6 feet tall if the statue were to be standing. Her body is much larger than Jesus’ body, supposedly to better portray a grown man across a woman’s lap. Another interesting difference from Michelangelo and other artists is the fact that he gave Mary a restrained and calm look compared to one of grief and sorrow, which is more commonly depicted. In fact, both Mary and Jesus have a look of peace and acceptance on their faces.

A very interesting fact about this statue is that it is the only piece of Michelangelo’s in which he signed his name. Michelangelo was alive long enough to see his Pieta bask in fame and popularity, but when he overheard that his work was being credited to a competitor of his, Michelangelo decided to carve his name across the statue to officially claim ownership of his work.

Michelangelo had created numerous pieces of amazing art during the Italian Renaissance and there’s no doubt that his contribution to the Italian arts will never be forgotten. The influence of his arts and talent still has an impact on artists today, both young and old, and he will continue to inspire people long after his time.

Tweet
More in this category: « Why do you Study Italiano? A Reliquary Bust from Siena »