A Reliquary Bust from Siena 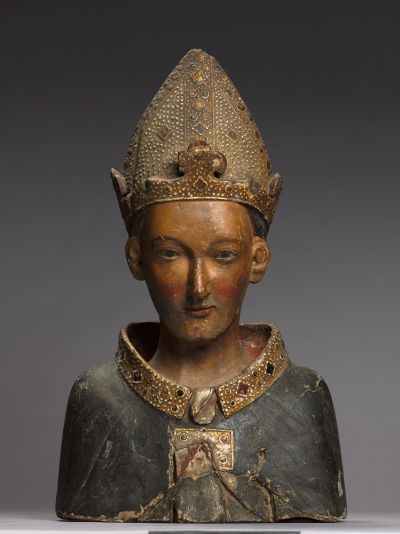 The possession and veneration of holy relics were of fundamental importance throughout medieval Europe. Relics were revered as a physical link between the natural and supernatural worlds. Some relics were associated with Christ and the Virgin. However, relics were primarily the physical remains of the saints, chiefly their bodies, and, by extension, objects that were owned or touched by these holy men and women. The saints were the holy dead who, through the meritorious actions of their lives, had earned salvation and a place in heaven near God, the angels and the Virgin. The power of the saints was manifest through their relics. The saints were therefore the natural and obvious intercessors for humankind. The living, instilled with medieval concepts of justice, venerated the relics of the saints to seek their patronage which, in turn, provided a link to the divine ruler. It was popularly believed during the Middle Ages that saintly patronage was made manifest through miracles such as the cure of disease or protection from natural calamities. It is no wonder that medieval pilgrims, in a world fraught with peril, sought close physical contact with relics. Such contact protected both the spiritual and temporal welfare of laypeople and religious communities who honored a saint through the veneration of his or her relics.

Reliquaries in the Middle Ages assumed varied forms ranging from simple caskets, book covers, monstrances, and crosses to figural reliquaries and others that were more sculptural and complex. Some conformed to the shape of the human body or part that it was meant to hold. One of these, a bust reliquary of Saint Louis of Toulouse likely made in Siena during the late 1300s, will today be found in the Cleveland Museum of Art.

This highly sculptural work, representing a youthful bishop, provides an example of a category of reliquary well-known during the late Middle Ages; the polychromed bust reliquary. The special veneration of reliquaries in the form of the heads or busts of local or important saints developed during the Middle Ages and continues to the present day. This form was especially embraced in Italy. On feast days, the sculptural image holding a relic would have been carried in procession and at other times placed in church sanctuaries or side altars for the veneration of the faithful. Carefully carved and painted, such reliquaries represent important artistic expressions of the period and may also be appreciated as compelling sculptural objects. The relic, enshrined within, was invisible to the faithful and the saint was presented ad vivum, according to life, for ritual veneration.

The museum’s bust reliquary of Saint Louis of Toulouse is carved from a block of walnut. A cavity now observable from the underside was the likely location of the relic, now missing. This cavity would have been invisible and inaccessible to the viewer as the object would have been originally mounted on a base or plinth. The plinth, which no longer survives, may have been inscribed with the name of the saint, the identity of the patron and the date. No inscriptions are today observable on the reliquary. As a physical object, the wood reliquary sculpture was covered with canvas and gesso then finished with polychromy (paint) and gilding. In its original state, it would have exuded a rich appearance with its bright colors and reflective gilding. Its style is typical of Sienese polychromed sculpture of the Trecento. Siena was renowned for its painted wood sculpture. Specific features of this bust reliquary support its identification with this particular saint. In paintings, frescos and sculptures, Louis of Toulouse is consistently represented vested in pontifical garments and mitered. More importantly, as the “boy bishop” of Toulouse, he is represented beardless with a youthful demeanor as is the case here.

The bust reliquary can, in fact, only be identified with Saint Louis, Bishop of Toulouse (1274-1297), second son of Charles II of Anjou, King of Naples (1288-1309) and nephew of St. Louis IX, King of France. When his older brother died in 1295, Louis became heir to his father’s secular titles. However, that same year, Louis went to Rome and gave up all claims to his royal inheritance in favor of his brother Robert of Anjou. He announced that instead he would take the Franciscan vows of poverty, chastity and obedience. On February 5, 1297, Louis was also consecrated Bishop of Toulouse where his uncle, Alphonse of Toulouse, had until recently been Count but had died in 1271 leaving no heir. At the age of about 22, Louis rapidly gained a reputation for serving the poor, feeding the hungry and ignoring his own needs. After just six months, apparently exhausted by his labors, he abandoned the position of bishop. Six months later, at age 23, he died of a fever.

Following the death of Louis, bishop of Toulouse in 1297, procedures for his canonization were quickly urged due to his reputation for good works and serving the poor. He was canonized in 1317 by Pope John XXII. His relics reposed in the Franciscan church at Marseilles until 1423, when they were taken by Alfonso V of Aragon to the cathedral church of Valencia, of which town Louis became patron saint. His veneration, though not widespread throughout Europe, was especially intense in Spain and Italy, particularly around Naples. Louis’ brother, King Robert of Naples, commissioned a large altarpiece dedicated to him painted by Simone Martini. The bust reliquary of Saint Louis of Toulouse, now in Cleveland, must have originally been commissioned by a Franciscan friary in or near Siena that had obtained one of his relics. Since Louis had himself been a Franciscan, his veneration would have been compelling in a community of Franciscan friars.

The special role of relics during the Middle Ages had a very direct impact upon the lives of men and women in a way that cannot be imagined in our own times. Every town, guild, confraternity, and church had its patron saint as did every Christian individual. Relics were so fundamental to the economic as well as the spiritual well-being of religious communities that such monasteries and convents often spared no effort in obtaining them. Relics bestowed honor and privilege upon the possessor and monasteries and cathedrals across Europe vied with one another to hold the most prestigious. Such relics attracted pilgrims, often from all over Europe. Candles were lit before the holy remains. They were censed. Offerings were made in the name of the saint and they were honored and cherished in a very direct way. The bust reliquary of Saint Louis of Toulouse reminds us of the intense veneration of the saints that defines the medieval piety and faith. It also provides a sublime example of a painted bust reliquary from medieval Siena.

Tweet
More in this category: « The Pieta: the Signed Work of Michelangelo A New Discovery in Pompeii: An Italy That Keeps Surprising »