Missal for the Franciscans of Montone 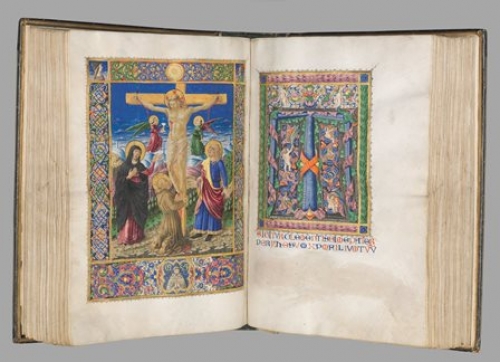 Missal for the Franciscans of Montone

The copying of texts and the making of books has always been requisite to the practice of the Christian faith. All medieval churches and monasteries were required to own essential sets of liturgical manuscripts, often inviting exquisite decoration. In 2006 the Cleveland Museum of Art acquired an illuminated manuscript of exceptional importance and the subject of a recent exhibition. Known today as "The Caporali Missal," this manuscript's illuminations are assigned to the brothers Bartolomeo and Giapeco Caporali, artists active in Perugia during the second half of the 15th century.

Made for the Franciscan community of Montone, a small town in Italy's Umbria region, the missal served as a liturgical service book for the altar of the Franciscan church of San Francesco. An inscription or colophon dates the completion of the missal to October 4, 1469 (the feast of St. Francis of Assisi), and identifies the scribe, Henricus Haring, and the guardian father (prior) of the Montone Franciscans, Stefano di Cambio. The missal served for many centuries as a liturgical book for the priest at the altar, an object of Christian ritual for the celebration of the Mass. Its sublime decoration also establishes the manuscript's place as a masterpiece of the art of Renaissance manuscript illumination.

The buildings of the friary are still preserved in Montone, a peaceful hill town in a beautiful panoramic position between two tributaries of the Tiber River. Montone has been called "uno dei 100 borghi più belli d'Italia," one of the most beautiful 100 villages in Italy, though it remains less well-known than the larger Umbrian towns of Gubbio, Deruta or Assisi. Walking through Montone's narrow streets and enchanting alleys, alternated by large flights of steps, the visitor reaches the old town center. Ascending, yet again, past window boxes filled with geraniums and gentle felines, one finally arrives at the Church of San Francesco, once home to the missal now in Cleveland.

The town was formerly controlled by the powerful Fortebracci family during the 14th and 15th centuries, which dominated the area and fortified the town. However, around the middle of the 16th century, the town was ceded to the Papal State. The Franciscan Church of San Francesco, which once housed "The Caporali Missal," is situated at the town's highest point and overlooks the valley below. It is not known when the Franciscans first arrived in Montone, but it was likely during the second half of the 13th century. By the beginning of the 1400s, the Franciscans built the church and convent of San Francesco. Under its guardian father, Stefano di Cambio, whose long tenure extended from about 1464 until 1507, improvements and embellishments were made to the church including frescos and ornate choir stalls. San Francesco was also used as the Fortebracci family chapel, and the family contributed to the embellishments. "The Caporali Missal" (1469) dates to Father Stefano's tenure and may have been used by him for the celebration of the Mass on his church's high altar.

An illuminated manuscript is, by definition, a book that was copied and decorated by hand. Of primary interest in the Caporali Missal are its illuminations, small paintings and other decorations rendered in brilliant pigments and gold. Here, they are extensive for a manuscript missal. The volume's masterpiece is a two-page deluxe opening to the Canon of the Mass with a Crucifixion scene and an elaborately decorated facing letter "T" (for Te igitur). The latter is composed of highly involved foliate decoration and putti and birds, surely one of the most spectacular decorated letters within a Renaissance missal. The Crucifixion is a magnificent rendering of the traditional scene used by artists to illustrate the Canon of the Mass: a Crucified Christ flanked by the Virgin and St. John with two angels. St. Francis kneels at the foot of the cross (attesting to the Franciscan usage of the volume). Elaborate use of burnished gold may be observed throughout.

The most excellent part of the illumination clearly falls to Bartolomeo Caporali, an important, documented panel and fresco painter and miniaturist. His hand may be perceived first and foremost in the Crucifixion miniature. The central element of the Crucified Christ, including Saint Francis kneeling at the foot of the cross, is a masterpiece of rare quality. The corpus of Christ with its imposing musculature is carefully modeled in subtle shades of ochre, yellow and brown and attests to intensive anatomical studies and a highly developed sense of naturalism on the part of the artist. Bartolomeo was likely assisted by his brother, Giapeco, a Perugian miniaturist, who completed this extraordinary letter "T" and the remaining illuminations.

Little is known of the painter Bartolomeo Caporali (1420-1505) before 1442, when he entered the painters' guild in Perugia. He is likely to have visited Florence, since his early style reflects the influence of Florentine painting, particularly that of Benozzo Gozzoli (1421-1497). Bartolomeo gradually established his reputation as a major artistic personality in Perugia. He was commissioned to paint numerous frescos and panel paintings for churches throughout Umbria.