The Spas of the Euganean Hills: The Best Mud in Italy 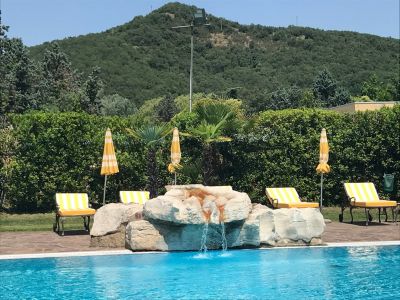 Activity holidays are very much in vogue these days, but what if it is the landscape that is full of activity rather than the people on holiday? I am talking about amazing regions of geothermal phenomena where the unexpected happens; from mysteriously hot water bubbling up from deep underground, to thundering eruptions from volcanoes.

Italy has a long tradition of using its thermal sources, going back to Roman times and beyond. Throughout the country you can find such areas which these days specialize in different kinds of treatment and cures as well as simple pampering.

Because of this tradition, until as recently as the late fifties, Italian workers used to have a one-week holiday or “cure” every year when they would stay at a thermal establishment courtesy of their national health service, INPS (National Insurance for Social Security). Here, they would enjoy treatment in lovely surroundings, usually with shady parks to stroll in after a morning’s treatment. One such establishment was in the Euganean Hills southwest of Venice, an area of extinct volcanoes where you can find hot water, steam and mud. In fact, the loyal visitors who returned year after year pronounced it to be “the best mud in Italy.”

For readers who are not familiar with the word Terme, it means a spa town in an area of geothermal activity. You will always see the word following the place name if it has natural hot springs, or mud or steam. In the Colli Euganee, with all three, there are the spa towns of Abano Terme, perhaps the most stylish and popular with Germans, Montegrotto Terme, and Galzignano Terme. There is also Battaglia Terme, now an almost forgotten spa yet once the most important in the area. At the end of its grand but now neglected park you can still find the fascist era building which housed 300 workers at-a-time for their annual cure/holiday.

The ancient hot lakes in these hills (such as Lake Costa near Arqua Petrarca, home of the 14th century poet) provide clay which is transported to hotels in the spa centers and infused with thermal water in holding tanks for 3 months. The microalgae produce mud with strong anti-inflammatory properties, and this maturing process takes place as the naturally hot water bubbles up through the clay to produce D.O.C. Mature Thermal Mud. The effect on the body is comparable with certain drugs but free from side-effects.

A cure can be covering the whole body in mud or treating an affected area. You always need a prescription before the treatment as the mud is very hot and can be a shock to the system. Most hotels have ground floor or basement areas where there are individual cubicles where the 20-minute treatment takes place and has to be followed by immersion in thermal water for 20 minutes. (By the way, I have tried the total mud cure, and it is terrifying! But at least the mud does not smell!)

The Regional Park of the Euganean Hills gets its thermal water from 10,000 feet below ground. It comes from the Lessini Mountains in the Pre-Alps and is considered to be unique thanks to its long journey, taking 25-30 years to arrive, flowing through limestone. This length of time enables the water to become enriched with mineral salts, and it bursts forth in the Euganean Hills at an amazing temperature of 187 degrees F. The mineral residue constitutes .04 pounds per gallon, which gives the water its unique quality and therapeutic value.

This very hot water feeds directly into the swimming pools of the many hotels in the area. In some hotels there are ‘artistic’ streams of water falling into the pool with warning signs about not going too near. One hotel in Montegrotto Terme has railings around a gigantic urn which appears to be pouring out near-boiling water. The warning sign is in three languages.

There are so many sources of thermal water in the Euganean Hills that the odd hotel without hot water advertises itself as having a ‘cold water swimming pool’ for its novelty value.

Whether you have a geological interest in geothermal areas, or a more aesthetic one, they certainly have a relaxing effect on holiday makers. People wander around all day in white robes, alternating between swimming, sunbathing, dining, and snoozing, with the occasional mud or steam treatment thrown in for good measure. Even if the ‘cure’ only has a psychological effect, you will certainly return to face your day-to-day existence refreshed and with renewed vigour.

For further information about the area see Myra Robinson’s book, “The Best Mud in Italy: tales from a faded Italian spa town in the Euganean Hills,” available via her website or from Amazon. www.myrarobinson.com

Tweet
More in this category: « The Italian Obsession with Food: A New Exhibition at Venezia Mestre Celebrate Your Italian Heritage with Thirty-One Days of Italians »