Italy, as Told by Shakespeare 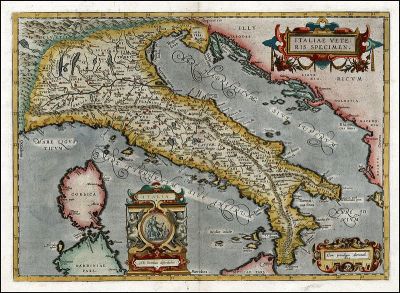 What made Italy the land of numerous plays by Shakespeare? Approximately one-third of his plays take place on the peninsula. Shakespeare’s work is immortalized, and his expressive writing has had a noteworthy influence on the English language, but what caused him to write about this foreign land?

Numerous theories exist about Shakespeare’s life and works, especially regarding Italy. Many note that his plays set in Italy are so adequately described they indicate first-hand knowledge. Documentation about Shakespeare is somewhat limited, but it is accepted that he was born in England in 1564. Although no records of a higher education are available, it is believed he attended a free charter grammar school in Stratford, where he learned Latin and participated in school theater.

At age 18, Shakespeare married Anne Hathaway, who was 26. Within a year, a daughter was born and in 1585, twins. Reports of Shakespeare resurface in 1592, when his plays are performed in London. By 1599, he and his fellow actors had created a theater company where Shakespeare starred in the plays he wrote. Shakespeare continued to write plays, poems, and sonnets, until around 1613. He died several years later.

By the mid-1500s, the Renaissance had filtered through the city-states and regions of Italy and was spreading throughout Europe. Still ruled by other European countries, a divided Italy had become united though its reputation for excellence in all forms of art and knowledge; and it became a popular place to visit.

After his twins were born in 1585 to around 1592, no accounts of Shakespeare are on record. Scholars of Shakespeare refer to this period as the “lost years.” Although there is no documented proof, some claim he spent part of this time in Italy. Because Shakespeare wrote about Italy in such specific detail, they assert he had to have been there. Those who disagree state his extensive knowledge of Italy was acquired through others who traveled there, or through the numerous publications about the Italian Renaissance that circulated throughout England.

Uncertainty about where Shakespeare gained his knowledge of the Italian cities – Florence, Rome, Venice and Verona, among others in his plays – is still a topic of discussion more than 400 years after his death. Discussions also focus on why he located his plays in these cities. It has been acknowledged that some of his plays are his versions of previous works, but little attention is given to the authors of those previous works.

In his presentation “Shakespeare and Italy,” author Lewis M. Elia mentions 12 plays Shakespeare wrote and their locations: “Coriolanus” (Rome), “Cymbeline” (Britain and Italy), “Julius Caesar” (Rome), “The Merchant of Venice” (Venice), “Much Ado About Nothing” (Messina), “Othello” (Venice), “Romeo and Juliet” (Verona), “The Taming of the Shrew” (Padua), “The Tempest” (Fictional Island off Italian Coast), “Titus Andronicus” (Rome), “The Two Gentlemen From Verona” (Verona and Milan), and “The Winter’s Tale” (Sicilia). Another play, “All’s Well That Ends Well” takes place in France and Italy.

Of Shakespeare’s plays, “Julius Caesar,” “The Merchant of Venice,” “Much Ado About Nothing,” “Othello,” “Romeo and Juliet,” and “The Tempest” are the most popular. All were written in the late 1590s to the early 1600s, after Shakespeare’s “lost years.” During those years, he may have been exploring Italian lands, or perhaps he learned about the cities through books by Italian authors. (Did Shakespeare read Italian or were the stories read to him?)

Lew points out the origins of several of Shakespeare’s most famous works. As early as 1378, the plot of “The Merchant of Venice” had been published in “Il Pecorone,” a collection of short stories attributed to the persona of [Ser] Giovanni Fiorentino. The earliest version of “Romeo and Juliet” was written by Masuccio Salernitano (born Tommaso dei Guardati; 1410-1480). Versions by Luigi da Porta (1485-1529) and Matteo Bendello (c1485-c1561) followed. The last, at least 30 years before Shakespeare’s adaptation.

The storyline for “Othello” originated with Giovanni Batista Giraldi-Cinthio (1504-1573), a novelist, poet and contemporary of Matteo Bendello. The premise of “Much Ado About Nothing” follows an often repeated theme of the emotional impact on relationships: intrigue, passion, jealousy, and deceit. It is noted the source may have been another work by Matteo Bendello; he wrote more than 200 short stories.

Much of the acknowledgements, though, go back even further, paying tribute to both Dante’s (1265-1321) “Divine Comedy” and Giovanni Boccaccio’s (1313-1375) “Decameron,” as sources for the plays – history, comedy and tragedy – that Shakespeare wrote. He was captivated by the Italian lifestyle and setting his plays in a foreign land gave him more freedom to write about topics that may have been too controversial for England at the turn of the 17th century.