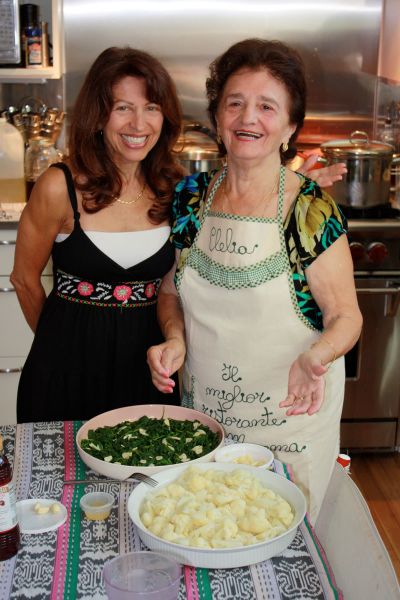 The unique life story of an Italian immigrant and her delicious original recipes.

Why Doesn’t Someone Write My Story?

“Why doesn’t someone write my story?” my mom has often said in the presence of her daughters. One of us had to take on this authoritative entreaty posed as a question. I decided it would be me.
Years ago, right before my dad, Vincenzo Lucarino, passed away, I had planned on writing his life story. I knew it would be adventurous and colorful and, ultimately, sad. Traveling to America at 17, working for the Mafia, joining the American army, going AWOL to marry my mom in Italy, bringing her to America, to Cleveland, to start a family. There he found work in the steel mills and railroad down in the Flats, and, due to an accident, lived the last 20 years of his life as a quadriplegic. Sadly, he died before I could sit across the table with a tape recorder ready to memorialize his stories.
I decided not to let anything get in the way of documenting my mother’s. Hers are rich and poignant; stories of innocence, adventure, joy and hardship and, ultimately, of coming to peace with her life.
Future generations should know what Clelia (Clara) went through growing up during WWII in a small town in Molise, marrying at 17, emigrating from Italy, alone and pregnant at 18, to start a new life in America. Raising five girls, losing the only boy she conceived, taking care of her husband after a freak accident left him a quadriplegic, and nursing her in-laws and then her parents when they were dying. Now a venerable old woman at age 92, she is the Matriarch of our big Italian family!

An Interview with an Immigrant

In 2004, in my Italian class, we were assigned to interview an immigrant, so naturally I chose my mother. This is the interview:
(Diana): Was it difficult for you to come to America in 1948, pregnant, 18-years-old, not able to speak English?
(Clelia): No, it was not hard. It was easy because my husband was in the American Army.
My mom took the passenger ship, Vulcania, from Naples to New York traveling First Class and was treated very well, unlike the first arrivals from southern Italy at the turn of the century.
(Diana): What happened when you arrived?
(Clelia): My in-laws were already in Cleveland: my mother-in-law, Maria, father-in-law, Nicola, and sister-in-law, Jennie. The day I arrived, we found out that Jennie was dying. She was 17 and my friend from Civitanova and she got spinal meningitis 5 months after she arrived in America. I cried every day because she was in a casket in the house with me, and because I missed my family – my parents, my brothers and sister, and my aunt.
(Diana): Was there a problem with you being Italian in America?
(Clelia): No, because many of our Italian friends came to America before we did. They were all happy to see me. Italians owned the stores where we shopped down the street. We went to St. Rocco where they had a mass in Italian. We lived in a neighborhood with mostly Italians, people that my father-in-law knew. They told me that it was a “rich” area and they had big, beautiful homes.
St. Rocco Parish, Cleveland’s first west side Italian Parish, was centered around Clark and Fulton Avenues, between W. 41st and W. 31st Sts. This is where I was born and lived, until my parents moved to Old Brooklyn, a multi-ethnic neighborhood, close to Our Lady of Good Counsel Church and School. In 1971, my parents moved to Parma as the flight to the suburbs emptied many of these Italian and ethnic neighborhoods.
(Diana): How did you learn to speak English?
(Clelia): I didn’t go to school because I had children to take care of. I read the paper every day. My husband and my father-in-law spoke English because they came to America 10 years prior to make money for their family in Italy. A lady friend of my mother-in-law told me to pick one word every morning and say it all day.
Becoming an “American” was very important to her. Knowing that a language is best learned when very young, my sisters and I asked our mother why she didn’t speak to us in Italian when we were growing up, though her dialect was primarily spoken among family members. She explained that if she would have spoken to us in Italian, she would have never learned how to speak English.
Though leaving her childhood and traveling to America alone was a grown-up thing to do, the ensuing tragedy and the trauma of being in the house with her dead sister-in-law and grieving in-laws brought out the innocent child in her as she cried all day, longing for her parents and siblings to comfort her.
In 1953, mom’s dad, Giovanni, and brother Peppino (Joseph) arrived and in 1955 after the death from cerebral palsy of Enrico (Henry), her other brother in Italy, her mom, Filomena, and brother Nicholas joined the rest of the family in Cleveland. Although saddened that Zia Concettina, her dad’s sister, didn’t come with them to America, she was happy to finally have the family together again.

View the embedded image gallery online at:
https://www.lagazzettaitaliana.com/history-culture/10022-la-cucina-di-clelia-an-excerpt#sigProId435ff58e7d
Tweet
More in this category: « Italian Realism Italy, as Told by Shakespeare »